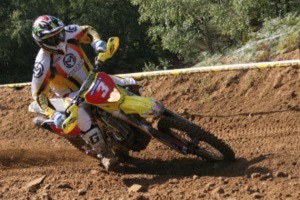 A muddy track in terrible condition was the story of the day for the latest round of the World Motocross Championships in Beto Carrero, Brazil.

Heavy rain on the morning of the race was initially thought to have been bad enough to cancel the round entirely. However, the rain let up and riders ended up competing on a track that has certainly seen better days. Even the best motorcycle tires did little against the clumpy and muddy track, and it was all riders could do to get across the finish line.

The poor conditions may have led to inconsistent results. In the MX1 class, Christophe Pourcel was the overall winner, winning the first moto and finishing fourth in the second. Normally, a rider needs to get on the podium two times to pick up the overall win, but the winner of the second race, Xavier Boog, was not even able to finish the first. David Philippaerts finished second with a 2-6 finish, while KTM's Kevin Strijbos came in third with a 5-3.

Points leader Antonio Cairoli later said it was the worst Grand Prix he had ever taken part in, with the Italian rider finishing eighth overall. Fortunately, Cairoli's chief competition in the championship, Clement Desalle, didn't fare much better, with a seventh-place finish.