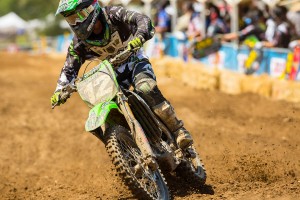 Blake Baggett was triumphant in both motos of the opening round in the 2012 Lucas Oil AMA Pro Motocross Championship 250cc class this past weekend, jumping out to an early lead in the point standings.

The 250cc class is expected to be especially competitive this year, with many of the riders already having multiple championships to their name. However, it was Baggett who established himself as the frontrunner on the opening weekend. The Kawasaki rider started the first moto in fifth place, but slowly worked his way toward the front.

In the second race, it appeared Justin Barcia would have a shot at walking away with the victory. However, Baggett passed Barcia late to get the win and his name atop the overall leaderboard. Barcia and Ken Roczen finished 3-2 and 2-3, respectively, making them tied for second place eight points behind Baggett.

"I couldn't expect anything else," said Baggett. "[Sweeping the motos] is beyond what I came in expecting to do. I just wanted to be on the box. Every weekend I don't want to ask for too much. I want to be in the points one way or the other with two rounds to go. I couldn't even tell you what was going on in the first moto. I honestly was just bouncing around. I knew in the second moto if I stayed on (Barcia's) rear wheel I could make a pass. The opportunity came and I took advantage of it."