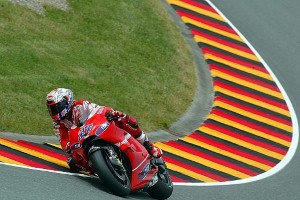 Repsol Honda rider Casey Stoner may have announced his retirement from the world of MotoGP yesterday, but that doesn't mean the racer is letting up in his quest for back-to-back championships. Stoner cited a lack of passion for the sport in his retirement comments, but you wouldn't be able to tell if you watched the rider during the first day of Le Mans testing.

The Friday testing was all Honda, as Stoner had the best time during the morning session and his teammate Dani Pedrosa was on top of the leaderboard for most of the afternoon. For Pedrosa, the Friday test was all about getting comfortable with the track again, as Le Mans was the site of the rider's collarbone injury last year.

Eventually, Stoner took the top spot on the leaderboard back from Pedrosa at the end of the afternoon session, finishing with a 1:33.740. Pedrosa was just a hair over 1:34, while Yamaha's Jorge Lorenzo was right behind him.

The surprise of the test was Alvaro Bautista, a non-factory rider for the Gresini Honda team. Bautista flew around the track and finished fourth, besting Ben Spies and the factory Yamaha as well as Valentino Rossi and Nicky Hayden of Ducati.