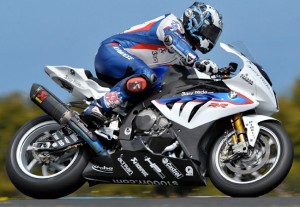 Injuries are a major part of motorsports, and it's not uncommon to see riders suffer an injury and open up a spot for someone else in their competition. In some cases, these performances have allowed riders to take their career to the next level.

While there are many major sport bike racing leagues around the world, there's no doubt MotoGP is the cream of the crop - the place all riders want to go. When American rider Colin Edwards went down to injury, it meant someone would get a shot at replacing him for the upcoming Le Mans GP.

Although the spot went to Australian rider Chris Vermeulen, who has won at Le Mans before, Edwards revealed on Twitter that he hoped World Superbike rider Leon Haslam would get the shot to ride the bike. While Haslam was flattered by the praise, the rider told Crash.net he wouldn't race in MotoGP while chasing the World Superbike championship.

"It's very nice to be thought of at the top of Colin's list and to be appreciated in that way - to go and do a one-off ride," Haslam told the news source. "But I'm a contracted rider with BMW. My main focus is here in World Superbikes. I've been good friends with Colin for a long time and knowing Colin he will be back again soon anyway."

While Haslam may be committed to World Superbike for the time being, don't be surprised if Haslam finds his way into MotoGP in the near future - especially with the recent expansion of the field to include the new Claiming Rule Teams.