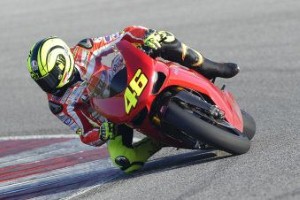 Fans of MotoGP know just how rare and unique the machines featured in the motorsports competition are, which is why it should come as no surprise that two race-used motorcycles recently sold for record-setting prices at an auction in Monaco.

RM Auctions partnered with MotoGP competitor and Italian motorcycle manufacturer Ducati for the exclusive auction, which featured a number of rare Ducati bikes from throughout history. However, it was the Desmosedici '10 and '11 GP bikes, ridden by Casey Stoner and Valentino Rossi, respectively, that attracted the most attention - and the highest prices.

Stoner's bike sold for $320,021, which the manufacturer revealed broke the record for the most ever paid for a Ducati vehicle. Meanwhile Rossi's '11 model from his slightly less-successful season last year went for a very respectable $312,579. Altogether, Ducati took in more than $1.6 million from the auction.

"We are very happy for the two new owners of these precious, high-tech racing motorcycles," said Diego Sgorbati of Ducati. "It was a great experience working with the RM team and to see that the bikes generated so much attention and interested bidding from collectors around the world."