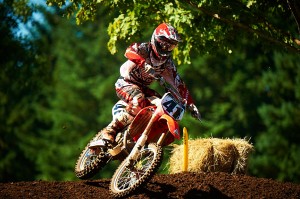 With Trey Canard still on the shelf due to a broken back, Team Honda Muscle Milk has announced a replacement for the oft-injured rider in the upcoming AMA Motocross series.

Canard is likely to miss all 12 rounds of the outdoor series, so Tommy Hahn will be the replacement as he rehabilitates. Hahn will join teammate Justin Brayton on the CRF450R as he chases the Motocross title.

"We have known Tommy for a very long time, and we are excited to have him back on the team for the 2012 Motocross series," said team manager Erik Kehoe. "He is naturally talented and we believe he possesses all the tools needed to run at the front of the pack."

The team has not given a timetable for Canard's return. Most agree Canard is a top rider - when he can stay on the track. Canard's injury woes have meant he hasn't completed a full season in some time. After spending much of last year on the shelf, Canard missed the opening Supercross race with a minor injury. Then, when he finally did get into the race, he broke his back in a nasty accident that had some fans fearing he may be paralyzed. As Canard recovers, it appears the rider won't be back on a bike until next year's Supercross series.