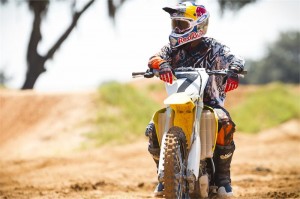 Just days after splitting with Joe Gibbs Racing, James Stewart has signed with Yoshimura Suzuki on a multi-year deal that will see the young rider compete in AMA Motocross and Supercross.

Stewart originally signed with Joe Gibbs Racing just last year, but the relationship has been disastrous from the start. Poor results coupled with Stewart's complaints about his bike led to a split between the rider and the team just one year into what was supposed to be a multi-year partnership, according to Cycle News.

Now, Stewart has signed with Suzuki, where he'll ride an RM-Z450 in both the Motocross and Supercross series. Unlike his previous team, Stewart has nothing but praise for his new machine.

"I'm really looking forward to joining the team," Stewart told the news source. "It's been a pleasure to get to test with these guys and meet the team. I'm very excited - I love the bike. Ever since I rode it from day one, I knew it was a great opportunity for me to come out and showcase my talent."

With Ryan Villopoto out due to injury, the AMA Motocross series is wide open this year, and Suzuki will be hoping that the former champion can get back to his winning ways in time to bring the team a title.