[caption id="attachment_12399" align="alignright" width="300" caption="It was more of the same this weekend in Nevada, as Ryan Dungey took home the win to close out the season. - Photo: InsiderMX.com"] 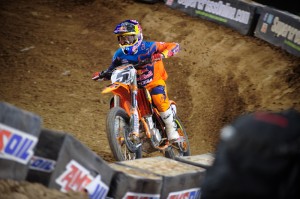 Although Ryan Villopoto is officially the AMA Supercross champion for 2012, Ryan Dungey has put on an impressive showing over the past few weeks with the champ out due to injury.

Villopoto wrapped up the championship weeks ago, but suffered an injury that will also keep him out of the outdoor AMA Motocross series later this year. Since then, Dungey has been the dominant rider, perhaps giving fans a glimpse of what's to come in the Motocross competition. It was more of the same this weekend in Nevada, as Dungey took home the win to close out the season.

Mike Alessi grabbed the holeshot, but he wasn't in the lead for long before Dungey caught up to him. The KTM rider built up a lead and eventually beat second-place Davi Millsaps by more than eight seconds. Ultimately, however, Millsaps finished second in the overall point standings, leaving Dungey in third.

"After the heat race, we made a change to the bike that really helped out in the main event," said Dungey. "The track was hard-packed tonight and a little tough. I am really happy that I could get this win for the KTM team."

Motocross fans will be watching closely to see who steps up in Villopoto's absence, but if the last few weeks are any indication, Dungey has to be the favorite to do so.