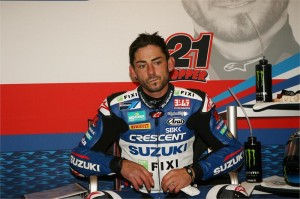 Crescent FIXI Suzuki's John Hopkins will be forced to miss this weekend's World Superbike race at Donington in England due to the injuries he sustained in a high-speed crash last time out at Monza.

Hopkins high-sided during the first race at Monza on Sunday and suffered a broken bone in his right foot and torn muscles in his left hip. It was originally expected that Hopkins would be fit to ride at Donington, but a further scan revealed the injury to be worse than first thought and he has no choice but to miss the event. It is hoped that Hopkins will make a full recovery in time for the US round of the World Superbike championship on Monday May 28th.

Crescent FIXI Suzuki will make an announcement on a replacement rider in the near future.