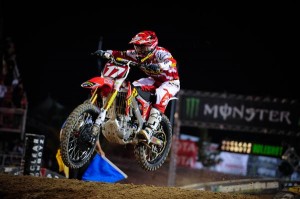 Eli Tomac officially clinched the AMA Supercross Lites West Championship one week ago, but that didn't stop the Honda rider from cementing his position atop the standings.

Tomac caught a lucky break last week when his closest competitor, Dean Wilson, was forced to withdraw from the race and earned no points. That turn of events, combined with Tomac's victory, allowed the rider to go into the final with the championship guaranteed. Tomac set out to prove it was no fluke, however, and beat a fully healthy Wilson for the victory. Wilson finished second, while Tomac's Honda teammate Wil Hahn took third.

Honda also triumphed in the Lites East Championship, where Justin Barcia took home the title. Tomac and Barcia then went head-to-head in the East/West Shootout, with Barcia ultimately coming out on top and Tomac finishing in second.

"This shows that GEICO Honda has done a great job this year with us winning both Supercross Lites Class titles and Wil [Hahn] finishing third tonight," said Tomac.

In the final standings, Tomac beat Wilson of Kawasaki by an even 30 points. Third place went to Marvin Musquin of KTM, who was 12 points behind Wilson.