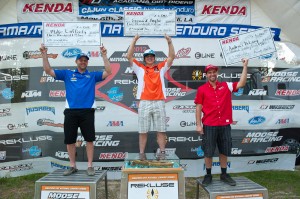 KTM support rider Steward Baylor claimed his fourth win of the season at the fifth round of the AMA National Enduro Series to further strengthen his hold on the series point standings.

Baylor started the day well with a win in the first special test section. His biggest challenger of the day was Husaberg's Mike Lafferty who was able to take the win at the second test. Baylor came back strong in the third test and also claimed the fast time in the fifth and sixth tests.

At the end of all six tests he was able to edge out Lafferty to claim is fourth win of the season. Now five rounds into the series, Baylor holds a 32 point lead in the series point standings.

Two other KTM riders joined Baylor in the top five. KTM rider Jesse Groemm was able to secure 4th overall while Factory FMF/KTM rider Russell Bobbitt earned a 5th place result. Unfortunately, Bobbitt's teammate and the winner of third round of the series, Cory Buttrick, suffered a crash early in the first test section injuring his knee. Buttrick was unable to complete the test section and sat out the remainder of the race to get his knee evaluated.

The riders will now take a one month break before returning to the series for the sixth round of the series to be held in Upton, WY on June 17, 2012. 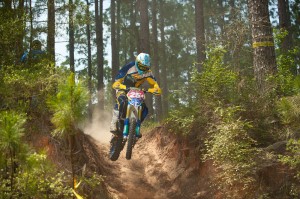 Factory Husaberg rider Mike Lafferty put in a remarkable ride at the fifth round of the AMA National Enduro Series where he earned 2nd overall after a close battle for the lead position throughout the race. His teammate Nick Fahringer earned 6th overall.

Lafferty, who had completely revamped his training program for 2012, came to the Louisiana race course ready to give point's leader Steward Baylor a run for his money. Lafferty started off well taking the third fastest time in the first section, but knew he needed to pick up his pace in order to challenge for the win.

In the next test he proved he had the speed to run with the best and took the win in that special test. He finished third in the next test and followed that with the fastest time in the fourth section. In the final two tests he was able to finish second and was just barely edged out by Baylor for the win. Lafferty's second place result at this round helped move him up in the point standings. He now sits 32 points down from Baylor in the championship standings.

"It was a really challenging race," remarked Lafferty. "This was the first race of the year with really hot weather conditions and that took a toll on a few riders. I was happy that my hard work has paid off and I was able to challenge for the win today. My goal is to get a win this season as it will mark my 70th National Enduro win."