Ryan Abrigo The Big Winner At The 2012 GEICO MiniMotoSX 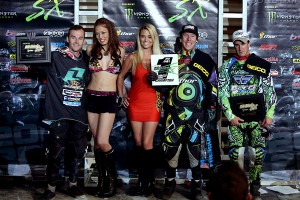 The ninth annual GEICO MiniMotoSX, Fueled by Monster Energy took place inside the Orleans Arena and BBR Monster Energy backed Ryan Abrigo was the big winner. With wins in both the 12 Inch Expert and World final as well as a second place finish in the 10 Inch Expert class, Abrigo walked away with $8,000 in purse money for the evening of Mini Bike racing. The 2012 MiniMotoSX was again the World's Largest Minibike race with over 300 entries and it was a truly International event with riders from France, Italy, Japan and the United States taking wins.

The World Final, which combines the top riders from Expert, Youth and Women's classes as well as top international riders, was also won by Abrigo. Browning and Valade again finished second and third respectively.

Hiroshi Nakayama came all the way from Japan to take the 10 Inch Amateur class win over Drake Williams and Robert Rexrode.

Duane Brown, one of the three brothers that founded BBR Motorsports won the 10 Inch Stock/Mod class. He has been trying to win this class for the past eight years. Ricky Fitzgerald finished second ahead of Tyler Zuech.

Thirteen year old Carson Brown won the 12 Inch Youth 13-17 class in his first year of eligibility. This was the first time that a father/son took MMSX championships on the same night. William Bojorquez finished second and Stephen Dunn took third.

Thibault Lacaille, another rider that made the trip from France won the 10 Inch Youth 13-17 class over Dillon Drummen and Carson Brown.

Special Thanks to the 2012 MiniMotoSX sponsors:

Complete results are available at this link: http://mmsx12.tracksideresults.com/

You can find more info at www.minimotosx.com.

For rules and race information visit www.minimotosx.com or email minimotosx@sorc.com