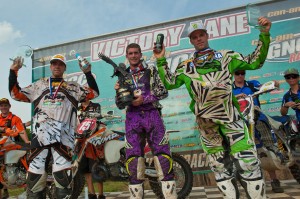 With a new GNCC venue came a new winner as WMR/KTM support rider Rory Mead captured his first GNCC XC1 class win at the fifth round of the series.

Mead got his KTM off to a great start and battled up front through the entire race. Keeping pace with Mead was Factory FMF/KTM rider Charlie Mullins who finished the race in 2nd place and moved closer to the top two riders in the championship point standings.

Mullins teammate, Kailub Russell, who had won the past three GNCC rounds, struggled on the rocky Kentucky course and was plagued by crashes throughout the day. Luckily he still maintained a fast pace and was able to make up time and bounce back to 4th place at the end of the race.

The third member of the Factory FMF/KTM Team Cory Buttrick had a great start to the race rounding the first corner in 2nd place. He remained inside the top five for the first three laps of the 3-hour race before he fell off the pace due to a previous injury from a National Enduro round two weeks prior. 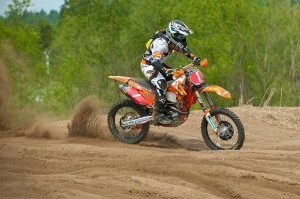 Factory FMF/KTM Team Manager, Antti Kallonen, mentioned, "We are very excited for Rory to get his first win and want to congratulate him on a job well done. I am also excited to see Mullins back up front and climbing back up in the point standings. To finish 1-2 today is a great accomplishment for KTM and we look forward to more podiums as the series continues."

In the GNCC XC2 class, it was KTM support rider Steward Baylor who continued his win streak to claim another win despite a hand injury from a race the week earlier. Baylor, along with GNCC Women's racer Maria Forsberg, remains undefeated in the series.


The Mammoth Overview And Point Standings