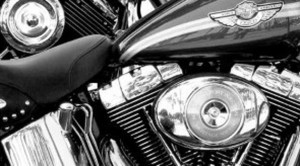 To cross the Pacific Ocean, most would assume you'd need a boat or a plane. However, at least one motorcycle has made the journey, according to CBC News.

Last year's tsunami in Japan caused an incalculable number of possessions to be washed out to sea - and at least one turned up recently on the other side of the side of the world, in British Columbia, Canada.

Canadian resident Peter Mark was riding his ATV on Graham Island when he came across a large white container on the beach with a motorcycle tire peeking out. Mark peered inside and found a Harley-Davidson, along with several other crates of intact goods.

"First I thought, this has got to be the craziest thing anyone has ever found," he told the news source. "Then I looked a little closer and the license had Japanese writing on it. The wall of the trailer had Japanese print on the tags. And the first thing that popped into my head was this is likely from the tsunami in Japan."

Canadian officials have been talking with the Japanese consulate in Vancouver to see if they can track down the owner of the motorcycle, using the license plate as a guide. Authorities estimate 1.5 million tons of debris is floating across the Pacific after the tsunami, although the motorcycle and shipping container is the first confirmed find beyond a few smaller items.