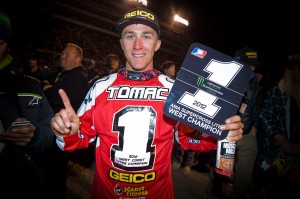 "I did my best not to do anything stupid. That was the best way to do it." - Photo: Frank Hoppen[/caption]

Looking at the point standings before the AMA West Lites Supercross event, most assumed that the series would need to go to the final race before the championship would be decided. However, injuries to two of the main contenders meant that GEICO Honda's Eli Tomac clinched the title with a win.

Tomac, Dean Wilson and Cole Seely were all close in the point standings headed into the race in Salt Lake City. Seely suffered a training injury and wasn't able to suit up. Wilson, meanwhile, fought through a shoulder injury in order to compete.

Unfortunately for Wilson, the track simply wasn't kind to him. The Kawasaki rider was unable to finish the race after a bad crash, netting himself zero points in the process. Tomac may not have needed the help anyways, as the Honda rider dominated the race and clinched the title.

"It was huge to close out the night with a race win and a championship," said Tomac. "Off the gate, I got bumped around and was able to slowly pick guys off and try to pace [myself]. I did my best not to do anything stupid. That was the best way to do it."