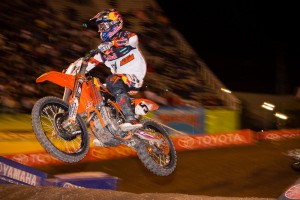 In only his second week back after returning from injury, Red Bull/KTM Factory rider Ryan Dungey claimed his third Supercross class victory of the season as he crossed the finish line first at the Salt Lake City Supercross.

Dungey's day started with mixed emotions. He was able to pull off the fastest lap time in the afternoon qualifiers but also had to skip out on the part of a practice session after a collision with another rider caused damage to his bike. Luckily, the Red Bull/KTM Team was prepared for the problem and quickly set to work to repair his bike and make sure it was ready for the main event.

Dungey easily qualified into the main event and was ready to begin his quest toward his third win of the season. He got off to a great start and was sitting in 3rd place after lap one. He quickly began to close in on the 2nd place ride of Jake Weimer and the two began a battle for the position. After swapping for the position, the two riders made contact near the halfway point of the race which caused Dungey to crash. He quickly recovered without losing a position and became even more determined to charge his way to the front.

With only four laps remaining he was able to make a pass on Weimer to take over 2nd place. He then spent the next two laps reeling in the lead ride of Davi Millsaps. With two laps remaining he made the pass for the lead and went on to claim his third victory of the season and the third for the KTM brand in Supercross racing. 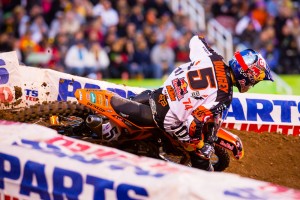 "It feels great to take another win tonight," remarked Dungey. "It is an even greater accomplishment to take this win after recovering from my collar bone injury. It solidifies that we made the right choice to come back to racing and finish out the Supercross Series before heading to outdoors. I just really want to thank my team tonight. They did a great job getting my bike ready and I couldn't have won without them."

Dungey and his team will now head to Las Vegas, NV for the final round of the series to be held May 5, 2012 at Sam Boyd Stadium. 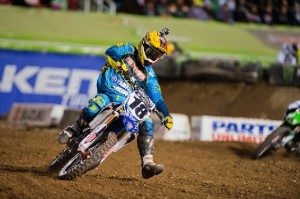 JGRMXs Davi Millsaps led for virtually the entire main event at the Rice-Eccles Stadium in Salt Lake City for the penultimate round of the AMA SX series but missed out his first victory on the YZ450F after running into backmarkers with two laps remaining. In front of more than 40,000 spectators the 24 year old was unlucky to miss the top step and was pipped to the line by Ryan Dungey.

Millsaps was quick across the layout for the sixteenth race of the campaign and won his heat race as well as setting the quickest time. With a clear goal to try and obtain his maiden triumph in blue and further cement his second position in the SX class standings he grabbed the holeshot and proceeded to show his rivals his rear wheel for most of the 20 lap distance.

Only an error entering the last two circulations provided Dungey with the momentum to snare the 25 points. Millsaps finished second but was able to see Justin Brayton take fourth which provides a seven point cushion going to Las Vegas for the season closer next weekend.

"I know it was close and honestly it was down to traffic, said Millsaps after his fourth podium celebration of 2012. It really sucks because we've all been working so hard to make this happen and we almost had it. But the good news is that, even though the championship hasn't really ever been possible for me, I'm one round away from clinching second, which would be the best me or my team has ever done. So, let's go to Vegas!"

The Sam Boyd Stadium will host the last Supercross meeting of 2012 next Saturday. 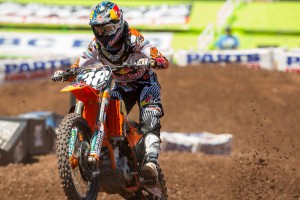 Musquin wowed the crowd with the fastest qualifying time in the early afternoon practice sessions. That gave him first gate pick in his heat race. His gate pick choice helped out and he was off to a 2nd place start and then quickly moved into the lead after the gate drop for his heat race. He led for the first part of the heat before an aggressive inside pass by Martin Davalos resulted in close contact between the two riders causing Musquin to crash. He recovered in 6th place and immediately set to work to try and pick off additional riders. He was able to get around one more rider and finish his heat race in 5th place.

In the main event Musquin pulled off another great start. He was sitting in 2nd position at the end of the first lap. A small mistake on lap two allowed Dean Wilson to pass him for 3rd and a few laps later he lost three more positions to drop to 6th. He held 6th position for nearly half the race before he moved up to 5th after Wilson crashed with a few laps remaining. Once in 5th he was able to maintain his pace and finish in the position. His 5th place finish gave him the points necessary to move up to 3rd place in the overall point standings.