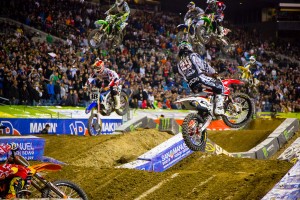 Many fans may not realize the economic impact motorsports events can have on a community, but the state of Utah was certainly appreciative AMA Supercross has returned for a race this year. State officials held a pre-race press conference with riders from the series, along with Utah Governor Gary Herbert.

The press conference featured professional riders Trey Canard and Chad Reed and was held at Rice-Eccles Stadium, the site of this weekend's race. According to Supercross Media, Herbert took to the podium with enthusiasm and welcomed the competitors to the state.

"We are excited to have Monster Energy Supercross back here in the great state of Utah," said Herbert. "This is an event we look forward to hosting in Utah. There is a tremendous amount of support that goes into the event and this is just another example why Utah is the state of sport. Our sport's segment in Utah is helping our economy grow in a significant way and market Utah as being a great place to live."

Utah Sports Commissioner Jeff Robbins revealed that over the past eight years, AMA Supercross events have brought $75 million in economic impact to the state, with an additional $20 million through "media promotional value."