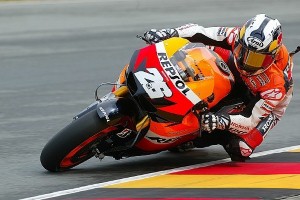 Officially, the fastest time at Friday's MotoGP test ahead of the race this weekend in Jerez went to relatively unknown rider Ivan Silva of Avintia Blusens BQR FTR-Kawasaki. During the morning session, Silva and seven other riders were the only ones on the track, with most of the major names waiting until the afternoon. Silva posted a time of 1:48.674, reports Cycle News.

By the time afternoon rolled around, the rain had set in and the track times were affected. Thus, even the factory-backed riders with championships to their names couldn't come within two seconds of Silva's best lap time in dry conditions.

The closest was Dani Pedrosa, who posted a time of 1:50.780 with approximately 10 minutes remaining in the session. Pedrosa was the fastest of the afternoon session before he was supplanted by Valentino Rossi and Jorge Lorenzo. Pedrosa managed to get back at the top toward the end of the test.

Rossi, however, may have been the talk of the test. After a frustrating tenth-place finish in Qatar and comments that indicated he wasn't happy with the Ducati GP12, Rossi turned in perhaps his best test of the season, finishing second behind Pedrosa. With rain in the forecast for Jerez, this could be Rossi's chance to get the first win of his Ducati career.