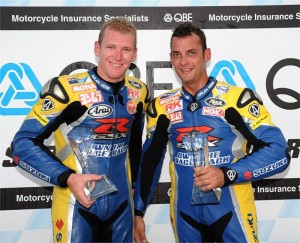 Josh Waters and Robert Bugden round out the podium.[/caption]

Team Suzuki's Josh Waters extended his lead in the QBE Australian Superbike Championship with a clean-sweep of Hidden Valley's second round in Darwin at the weekend.

Waters rode the brand new 2012 model Suzuki GSX-R1000 to Superpole and both race wins in convincing fashion during the weekend, stretching out a 26-point lead in the series after two of seven rounds to be contested.

The 2009 Superbike champion and reigning Australian Endurance Champion won the opening 14-lap race of the weekend by 3.066 seconds in hot and humid conditions before backing the result up in the shortened second race with victory by 4.442 seconds.

Said Waters: "I didn't think that the weekend would be so successful, considering how strong the competition is, but it's a great way to keep the ball rolling and I'm really happy with the 2012 GSX-R1000. It was very warm and it wasn't easy, but I've won in Darwin all three years we've raced there and seem to do good on that track. We have to keep our heads down now and keep fighting for this title with the early lead we have."

Team Volvo Group Suzuki rider Robbie Bugden made it two GSX-R1000s on the podium in third overall after claiming second in race one for a Suzuki 1-2, before a fighting fifth in the second outing sealed his first top three finish of the year. Bugden is now third in the Championship standings.

"I was comfortable right away and had pretty good speed straight away," the current New Zealand Superbike Champion said. "I was fastest in regular qualifying but didn't get the lap I wanted in Superpole and then the first race was strong to finish behind Josh. I got a horrible start in the second race, but caught back up to fifth before the red flag. I'm happy with third overall, for sure."

Team Suzuki newcomer Ben Attard endured a trying round for sixth overall as he continues to gain experience on the GSX-R1000, scoring vital Championship points as he aims to progress throughout the season. Attard scored fifth in race one and sixth in the second and is now sixth in the title hunt.

"My results obviously weren't what I was after," Attard said. "I just didn't seem to be able to push and really challenge for the podium, so it was just one of those weekends. I'm pretty disappointed with the result, but the team worked hard and the bike was great - I just couldn't get comfortable."

"The weekend didn't go to plan for me," Waters admitted. "We struggled to find the right settings on the bike for me and didn't really make any improvements until Sunday - but that was too late. We need to start winning races before we lose touch in the series, so that's definitely the plan in the upcoming rounds."

The Superbike Championship will continue in a two-plus-four round alongside the V8 Supercars at Wanneroo in Western Australia on May 4-6th. The next Supersport round will take place at Queensland Raceway on June 1-3rd.