Ryan Villopoto has dominated just about every AMA Supercross race this season, and already has the championship clinched. So what happens after the champion is forced to withdraw from the race early on? Another rider gets a chance in the spotlight. 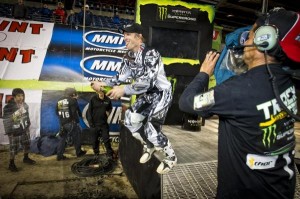 Veteran motorsports competitor Andrew Short got his first-ever AMA Supercross victory in Seattle. Short, who missed seven races this season due to injury, grabbed the holeshot early and was never really challenged throughout the race. Villopoto withdrew after sliding and taking a handlebar to the stomach. KTM's Ken Roczen made a run at Short, but fell back as the race went on, leaving Short to grab the win.

"It doesn't feel real," said Short. "My team has been through some challenges, but we stuck together. There are so many people who have helped me in 11 years of doing this. I'm getting old. I didn't believe [I could win] too much until the end, and I think that's been one of my problems in the past. All I wanted to do was be out here and to win is unreal."

Ryan Dungey also returned to action after breaking his collarbone, but had to settle for sixth place after crashing early on.