Tonight marked two highly anticipated returns as Red Bull/KTM's Ryan Dungey returned to racing after sitting out the past six rounds with a broken collarbone. Fans were also excited to see Roczen join Dungey in his first Supercross class race of the season.

Roczen showed his KTM 350 SX-F had the power to run out front when he pulled the holeshot in the first Supercross heat. He battled with Ryan Villopoto for a few corners before falling to 2nd. He was able to hold on to 2nd place earning a great gate pick into the main event.

Although Dungey did not earn the holeshot in his heat, he plowed his way to the front of the pack by the second corner and never looked back. He went on to lead every lap of his heat race proving to the crowd that he can pick up where he left off. His heat win marked his third of the season. 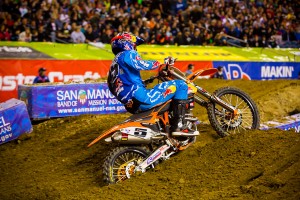 "It's great to get started on a positive note by winning my heat race," commented Dungey. "I was a little bit rusty coming into today but the more I ride the track the more comfortable I get. A start is going to be key tonight so I am going to have to get out front early and ride my own race."

In the main event, it was Roczen who piloted his 350cc race machine out front early rounding the first corner in 2nd place. Dungey was a few positions back in 5th. Roczen and current leader Andrew Short began a battle for the lead that lasted the first half of the race. Meanwhile, Dungey began to reel in Justin Brayton for 4th place. On the eighth lap Dungey went for the pass on Brayton but came back inside of the turn too quickly and clipped Brayton's wheel causing him to crash. He quickly recovered but lost two positions in the process. In the remaining laps he was able to pass Mike Alessi to takeover 6th where he would finish for the night.

"Finishing 6th tonight is definitely not where I want to be," stated Dungey. "However, the best way to improve in racing is to race and that is what I intend to do for the next few rounds to help me improve and prepare for the outdoors." 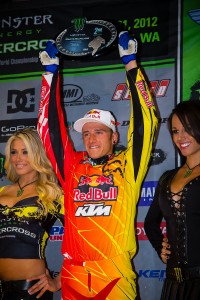 Roczen had the race of his Supercross class career - Photo: Hoppenworld.com[/caption]

Meanwhile out front Roczen was having the race of his Supercross class career as he was still holding down 2nd position. He held his pace and finished in 2nd behind his good friend Andrew Short who took his first career win.

"Tonight was such an amazing night," remarked Roczen. "I had a great heat and a great main event. I am so happy to be on the podium and I am even more excited for my friend 'Shorty' (Andrew Short) to get his first win. We had a great battle at the beginning of the race and it was really exciting to compete for the win." 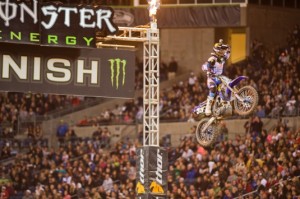 Davi Millsaps pushed on towards his sixth top five finish of the season after almost being hit.[/caption]

The fifteenth round of the AMA SX series, also an FIM World Championship, took place in in front of more than 52,000 spectators at the open-air CenturyLink Field in Seattle and JGRMX's David Millsaps grabbed fifth position in the SX class while Ryan Sipes returned with a bang from injury to pick up his first victory in the West Coast Lites category.

Across a damp and rough layout Millsaps pushed on towards his sixth top five finish of the season after almost being hit by champion Ryan Villopoto on the first lap. The 24 year old was again the sole representative for the team in the main event as James Stewart was still not fit enough to compete and now only two rounds remain in the next fortnight of the 2012 contest.

"Davi is putting in 100-percent effort for us, and that's all we can ask for," said Team Principal Coy Gibbs. "Tonight was tough because of the ruts and all that but Davi still had a really good ride, all things considered. It was an opportunity to win a race if he could've gotten a better start but he was in the mix for the whole distance, so that says a lot."

In the Lites Sipes made a great start on his Star/Valli YZ250F and pulled away from the rest of the West Coast pack for what was a fairly simple run to the chequered flag. "Honestly, I didn't push too hard," he said. "I wheelied off the start in the heat race, so I knew I had to keep it down for the main and it just worked out. I just rode 15 solid laps."

Millsaps is heading for second place in the 2012 championship with a 3 point lead over Justin Brayton in the standings. The penultimate meeting takes place at Salt Lake City this coming Saturday. 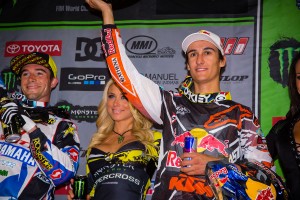 Marvin Musquin proved he had been training right during the off season as he took a podium finish - Photo: Hoppenworld.com[/caption]

Red Bull/KTM Factory rider Marvin Musquin proved he had been training right during the off season as he returned to the West Supercross Lites Series to take a podium finish at Century Link Field.

Musquin nailed the holeshot in the second Supercross Lites heat jumping out to the early lead. He led every lap of the six lap heat receiving heavy pressure from Wil Hahn on the final corner. Musquin was able to hold the lead and take his first heat win of the season.

"It feels great to get the heat win tonight," commented Musquin. "I like this track tonight and was able to get the fastest time in qualifying and take a holeshot to win my heat. I will need to get the start in the main event and put in 15 aggressive laps in order to take the win tonight."

Unfortunately, Musquin didn't get the great start he wanted in the main event and came around the end of the lap one in 11th place. He quickly set to work to make passes and move toward the lead group. By the halfway mark he had already passed into 6th place and a lap later he moved into 5th as he passed Martin Davalos. On the tenth lap of the race he was able to set the fastest lap time of the entire race and close in on the battle for 3rd. He quickly moved around Hahn and later Cole Seely to move into 3rd position. With a lap to go he was able to make a pass on Eli Tomac to take over 2nd position. He rode a safe pace to the finish to take a remarkable 2nd place finish for the night. 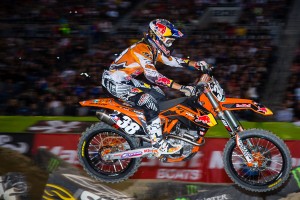 "I was definitely bummed to get 2nd here tonight," remarked Musquin. "I didn't know that Ryan Sipes was leading so when I passed Tomac I thought I had passed for the lead so I was a little bummed to find out it was 2nd. Overall I am happy with my result tonight. To be on the podium is a great way to finish at the final few rounds." 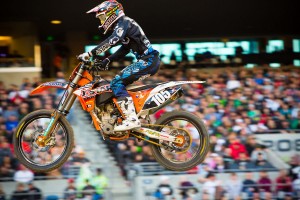 Matt Moss came into Seattle with a lot of confidence, but his night would be cut short after a crash early in the race - Photo: Hoppenworld.com[/caption]

The JDR/J-Star/KTM ride of Matt Moss came into Seattle with a lot of confidence based on his podium finish at the previous round. Despite his high confidence, his night would be cut short after a crash early in the race caused him to finish the night in 17th.

Moss had a great start to his heat race nearly grabbing the holeshot before getting edged out by Dean Wilson. Martin Davalos was able to get around him on the second corner which put Moss back into 3rd. For the remaining laps Moss received heavy pressure from series point leader Eli Tomac. For five laps he was able to hold him off and secure 3rd place and a great gate pick for the main event.

In the main event, Moss earned a mid-pack start and was sitting in 10th place after the first lap. A lap later he suffered a crash which cost him almost a full lap before he was able to recover. He was able to make up a few positions to finish 17th for the night.

"Unfortunately I suffered a bad crash early in the race. Luckily I was to recover without injury and finish the race. I wasn't able to salvage too many points but every one counts so I am glad I was able to pick off a few people," stated Moss.