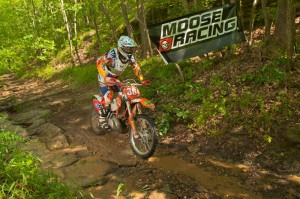 KTM support rider Steward Baylor shines again as he won all six special tests to take a dominating win over the rest of the field at the fourth round of the AMA National Enduro Series.

The seventeen year-old rider got off to a great start after winning the first test section by 26 seconds over FMF/KTM rider Charlie Mullins. Baylor continued to outshine the competition throughout the remaining five tests to take each win and earn the overall.

Behind him there was a great battle for the remaining podium spots between Russell Bobbitt, Mike Lafferty and Cory Buttrick. The riders diced back and forth throughout the day with Bobbitt stepping it up in the second half of the day to move into 2nd position. The final podium spot went to Lafferty with Buttrick settling for 4th.

Mullins, who had a strong showing in most of the tests suffered from a brake problem in the fifth test where he lost a lot of time and dropped outside of the top three. He eventually finished the day in 8th place. 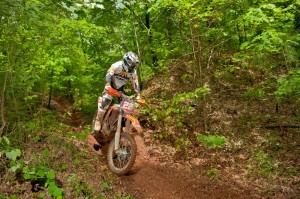 Russell Bobbitt stepped it up in the second half of the day to move into 2nd position - Photo: Shan Moore[/caption]

"It was a great day for Baylor and Bobbitt today," remarked Factory FMF/KTM Team Manager Antti Kallonen. "We are very excited for both of them as they are riding really well right now. It is unfortunate that Mullins suffered a technical problem because he would have been in the hunt for a podium today. We are also very proud of Buttrick. He is still recovering from an injury suffered at the last GNCC race and to finish 4th today was a great accomplishment considering he is not yet 100%."