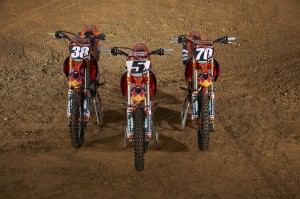 The Red Bull/KTM Team is excited to announce that all three riders will reunite at the Seattle Supercross this weekend as team rider Marvin Musquin returns to the West Supercross Lites Series joined by Ken Roczen and Ryan Dungey in the Supercross class.

The French rider, Marvin Musquin will continue his campaign toward a top three position in the overall point standings in the West Supercross Lites class while East Supercross Lites rider Ken Roczen will step up to the Supercross class aboard the KTM 350 SX-F.

In one of the most anticipated returns of the season, both riders will be joined by Ryan Dungey who will make his return to the Supercross class after sitting out the past six weeks healing from a broken collarbone. Dungey has been riding Motocross in preparation for his return to racing and after easing his way back has built up the confidence to make his return to the series this weekend.

"It will be great to have the whole team together in Seattle," says Red Bull/KTM Team Manager Roger DeCoster. "There is always a great atmosphere amongst the team and sponsors when all three riders are together and we look forward to producing solid results this weekend."

Look for all three riders under the Red Bull/KTM tent on Saturday, April 21st at Qwest Field.