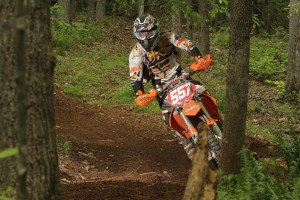 Kailub Russell increased his win streak to three after taking his third consecutive win of the season at the Big Buck GNCC - Photo: Shan Moore[/caption]

Factory FMF/KTM rider Kailub Russell increased his win streak to three after taking his third consecutive win of the season at the Big Buck GNCC, round 4 of the GNCC Series.

Russell came into the fourth round with the confidence of someone who has found where he belongs. "Once you win and remember what it takes to win; it comes easy," remarked Russell. "It always takes me a little while to adjust when I move into a different class but once I find my way and learn what it takes to win I can run with the best of them."

That statement proved true as Russell once again got off to a great start sitting inside the top five around the first corner alongside his teammate Cory Buttrick. The third member of the team, and the reigning GNCC XC1 Champion, Charlie Mullins had worse luck and rounded the first corner in second to last position.

By the end of the first lap Russell had moved into the lead while Mullins had made a remarkable run through the pack to sit in 3rd with Buttrick one spot back in 4th. Mullins made the pass on Paul Whibley to take over 2nd place on the next lap and began to pressure Russell for the lead. The two riders pulled from the field before both made a mistake on the fourth lap.

Russell had a big crash when he high-sided after hitting a rock he couldn't see because of the dust on the course. Meanwhile Mullins lost time getting hung up in one of the courses large mud holes. Luckily, Russell recovered quickly and was able to maintain his lead while Mullins lost one position to Whibley. The next lap, the riders stopped for gas and Russell got the energy burst he needed to return to the race and pull from the pack. 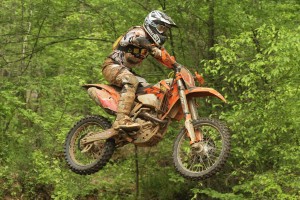 Charlie Mullins made a remarkable run through the pack to sit in 3rd place - Photo: Shan Moore[/caption]

"When I stopped for gas it gave my body a few seconds to recover and when I returned to the race I felt better than I did in the first half. From there, I just focused on riding a good pace out front and by doing so I was able to increase my lead and take the win."

Russell crossed the checkered flag one minute ahead of Whibley who just edged out Mullins for the 2nd place position. Buttrick went on to finish the race in 7th place after a crash mid-way through had caused him to lose his top five result.

Now four rounds into the series Russell is only two points behind Paul Whibley in the championship standings. "I hope to continue my streak at the next round and hopefully move into the lead in the overall point rankings," stated Russell.

Another rider who has been on fire all season long is KTM support rider Steward Baylor who remained undefeated in the XC2 class after capturing his fourth win of the season. Baylor has been dominating the GNCC XC2 class this season and proved he is a step ahead of the field after winning the Big Buck GNCC by four minutes. The young rider now has a 36 point lead on the rest of the competition. 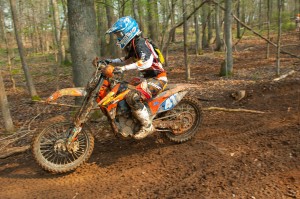 Maria Forsberg captured her fourth win in the Women's GNCC class to remain undefeated in the series - Photo: Shan Moore[/caption]

Factory FMF/KTM rider Maria Forsberg captured her fourth win in the Women's GNCC class to remain undefeated in the series at the fourth round of the GNCC Series dubbed the Big Buck GNCC.

Forsberg got a great start and led every lap of the competition to claim her fourth victory. Her margin of victory was an impressive five minutes and fifty-one seconds. Forsberg also landed on the overall podium for the second race in a row.

"My goal this year is to overall the morning class," remarked Forsberg. "I came close at the third round just missing it by four seconds and today I got third. I am hoping a can make it happen at the next round."