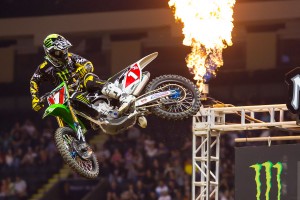 Ryan Villopoto turned in perhaps his most dominant performance to date, easily picking up the win - Photo: Frank Hoppen[/caption]

Ryan Villopoto has already clinched the 2012 AMA Supercross series, but that didn't seem to change his riding style much at the Mercedes-Benz Superdome in New Orleans. One week after officially capturing the title, Villopoto turned in perhaps his most dominant performance to date, easily picking up the win and extending the gap between himself and the other riders in the series even further.

Villopoto grabbed the holeshot early and never looked back, ultimately leading wire-to-wire. The Kawasaki rider was never really challenged during the race, and he finished with a whopping ten second lead on the second-closest rider, Josh Grant of Jeff Ward Racing.

After the race, Villopoto said the track was deteriorating as the competition went on, something other riders echoed as well.

"The track was tough, so the bike was a big key," said Villopoto. "The track was breaking down and it had a lot of ruts, so it was easy to get caught off guard. You had to stay on toes and try to log consistent laps. I'm looking forward to returning home next week in Seattle."

Mike Alessi looked assured for third place until he crashed a little after halfway through the race, allowing Justin Brayton to pass him and get on the podium instead. 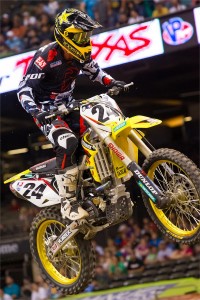 Brett Metcalfe put together a great performance in the 'Big Easy'.[/caption]

The Australian piloted his Yoshimura Suzuki RM-Z450 to a well-earned fourth-placed finish, marking his fourth top-five result of the 2012 season so far.

The New Orleans race followed a one-weekend break that gave Metcalfe a much-needed rest. Although he took advantage of the down time, he was more-than ready to race: He started the night by getting the holeshot in his eight-lap heat race and gave 100 per cent and finished third.

"It was nice to have a weekend off and come back with a fresh start," said Metcalfe. "I wanted to come and try to do some good today and I felt like we did. The Yoshimura Suzuki RM-Z450 was great in practice and I felt comfortable. We struggled in one segment, but I was really putting down good laps on the rest of the track and I was happy with the way I was riding. In the heat race we ripped the holeshot, but then I went back a couple of spots when I made a mistake in the sand. But I still got third and was able to get a good gate pick for the Main."

In the Main Event, watched by more than 32,000 fans, Metcalfe got an excellent start and maneuvered through the sea of ricocheting riders relatively unscathed. He made an effort to turn smooth, consistent laps and looked for ways to find more speed throughout all 20 laps to finish fourth. 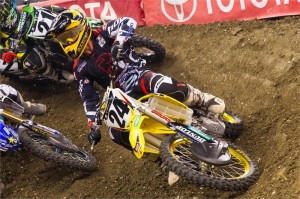 Metcalfe got an excellent start and maneuvered through the sea of ricocheting riders relatively unscathed.[/caption]

Said Metcalfe: "I got another great start in the Main, but that first lap, I was like a ping pong ball. I was in the wrong place at the wrong time and I got slammed around and dropped back a few places. But once I got going and into a rhythm, I was able to click off some good laps. Finally, about midway through the race, I finally found a better line in the segment I was struggling with and I was able to pick it up and I got back up to fourth."

With just three races remaining, Metcalfe and the Yoshimura Suzuki squad want to finish the season strong. Said Metcalfe: "I'm looking forward to Seattle. We'll be working hard this week and come out next weekend and keep this momentum going."

Team Yoshimura Suzuki Racing's next event is the 15th round of the 2012 AMA/ FIM World Supercross Championship on Saturday April 21st at CenturyLink Field in Seattle. 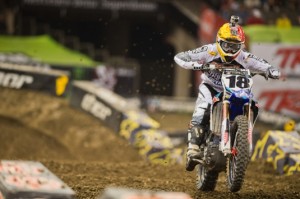 Davi Millsaps again demonstrated his decent speed and form this season by recovering from a first corner crash in the 20 lap main event to charge back to 6th place.[/caption]

Yamaha captured two positions in the top seven of the fourteenth round of the AMA Supercross series (also and FIM World Championship) at the Mercedes-Benz Superdome in New Orleans last weekend. Watched by more than 33,000 spectators JGRMX's Davi Millsaps again demonstrated his decent speed and form this season by recovering from a first corner crash in the 20 lap main event to charge back to 6th place.

New Orleans was a tough meeting for Millsaps who crashed in the Heat race and had to dig into his reserves to win the Last Chance Qualifier and enter the gate for the Main with a lowly slot. The 24 year old was again racing alone after James Stewart's hand injury kept the former champion on the sidelines.

Millsaps was then part of a pile-up that caught another three riders around the first turn but recovered his YZ450F and began a flight behind the disappearing pack that would eventually drag him past brand-mate Weston Peick. "He has really shown a lot of heart this year,' commented JGR owner Coy Gibbs on Millsaps' efforts. "He's working hard, and it shows. He went down in the heat race and we didn't know if he'd be able to come back for the LCQ, but he did, and he won the LCQ. Then he went down in the first turn in the main event and came all the way back up to sixth from way back there. He was on the gas. We're really proud of Davi."

Millsaps is now second in the standings - a career-best ranking - and five points in front of Justin Brayton. Stewart is fifth. Rounds in Seattle, Salt Lake City and Las Vegas remain for the injury-hit campaign, starting with the visit to CenturyLink Field next Saturday. 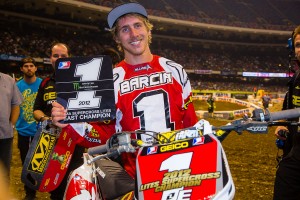 Going into the Supercross Lites East event in New Orleans, Justin Barcia only needed to finish fourth or better in order to clinch his second championship in a row - and that's exactly what he did.

Barcia has been on the podium in every Lites East event he entered this season, but he was clearly in no hurry in New Orleans, racing conservatively to avoid crashing. Barcia was near the front of the pack all night but eventually settled for fourth, ensuring him the Lites East title.

"Tonight is mind blowing," said Barcia. "To win two championships feels amazing. It was a tough season at times, but it took a lot of hard work and dedication to get here. I couldn't have done it without everyone on my team. This is an awesome feeling."

Meanwhile, the Monster Energy Kawasaki team took advantage, with its two riders finishing first and second. Teammates Darryn Durham and Blake Baggett battled for the top two positions toward the end of the race, with Durham eventually coming out on top. Meanwhile, Barcia's Honda teammate Justin Bogle passed him for third place.

The remaining race will be a battle for second and third place overall, with a few riders in contention. Durham and Ken Roczen both have 143 points, while Blake Wharton has 142. 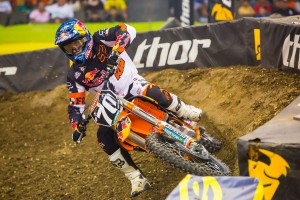 The Red Bull/KTM ride of Ken Roczen earned 5th overall at the penultimate round of the AMA East Supercross Lites Series held at the Louisiana Superdome.

Roczen was at the top of the leader board during the afternoon practice sessions where he earned the fastest qualifying time to take the first gate pick in heat number two. When the gate dropped for his heat, Roczen leaped forward to grab the holeshot. He went on to lead every lap to take his second heat victory of the season.

Roczen carried his momentum into the main event where he got off to a 6th place start. He maintained that position for the first two laps as the final rider in a six-man train for the lead. He passed Alex Martin on the third lap to take over 5th and got handed another position a few laps later when fellow KTM rider Malcolm Stewart suffered a crash.

Around the mid-way point Roczen was able to capitalize on a mistake by Justin Barcia to take over 3rd position. He maintained the position for two laps before a big mistake cost him two positions as he dropped to 5th. Unfortunately, Roczen reported that he suffered from arm pump quickly after that mistake which hindered his lap times. He was able to hold on to his position and finish inside the top five at the end of the fifteen lap main. 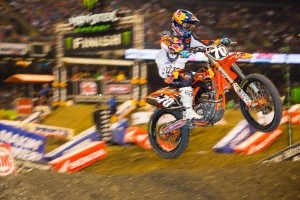 Around the mid-way point Roczen was able to capitalize on a mistake by Justin Barcia to take over 3rd position before dropping back to 5th - Photo: Hoppenworld.com[/caption]

"I am bummed that I suffered from arm pump at the end of the race because I was riding really well today and felt very comfortable on the track. We have one race left and my goal is to win it. I really like the final round in Las Vegas and I am looking forward to a great performance to end the season," stated Roczen. 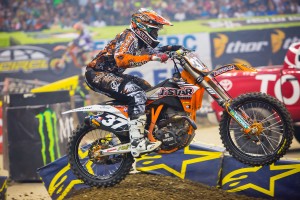 Malcolm Stewart showed he was among the most determined riders of the night when he recovered from a hard crash while running in 2nd place - Photo: Hoppenworld.com[/caption]

JDR/J-Star/KTM rider Malcolm Stewart showed he was among the most determined riders of the night when he recovered from a hard crash while running in 2nd place on the fifth lap of the race held at the Louisiana Superdome.

Stewart had a great start in his heat race rounding the first corner in the top five. He quickly moved into 3rd place before the end of the first lap. He then set his sights on the 2nd place ride of Phil Nicoletti. On the fifth lap of the heat race he was able to make the pass stick and claim 2nd position. A lap later he crossed the finish to secure his spot and earn a great gate pick for the main event.

Stewart got the start he needed as the gate dropped for the Supercross Lites main event. He was 3rd around the first corner and on the tail of the leaders. On the third lap he was able to pass current point leader Justin Barcia to take 2nd position. He maintained the 2nd place spot for the next three laps before he suffered a huge crash in the whoops. He was down for over a lap being looked after by medics before he stood up on his own and got back on his bike. Now a lap down, Stewart set to work to salvage any positions and points possible. He caught one rider by the eighth lap and was able to make up a 15 second deficit on another rider to move into 17th when the checkered flag flew.

"This is just another disappointing race to my season. I was feeling really good today and just made a mistake in the whoops that cost me a lot of time and positions. I am thankful to walk away uninjured but am really upset that I was not able to get a spot on the podium," remarked Stewart.