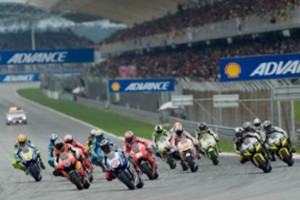 MotoGP race director Mike Webb met with the various teams in the series before the race officially kicked off in Qatar to discuss some possible rule changes that could soon be instituted in the series.

With the introduction of the new Claiming Rule Teams, MotoGP organizers have an interest in making all the bikes competitive and reducing the expense of fielding a MotoGP bike. However, this isn't something that all the factories may agree to. One contentious issue, for example, is talk of instituting a rev limit on the bikes, reports Cycle News.

Webb told the news source that introducing a rev limit to the series was "inevitable and it's the single easiest cost saver and performance limiter. At the moment we're relying on fuel capacity as a performance limit. The guys are getting very, very good at running lean engines, so we've got extremely fast motorcycles."

At least one factory is opposed to the change - Ducati. That's not surprising, considering that the new Desmosedici GP12s are widely considered to be the highest-revving engines in the competition.

Other issues that were brought up include a single motorcycle limit for each team and flag to flag bike changes.