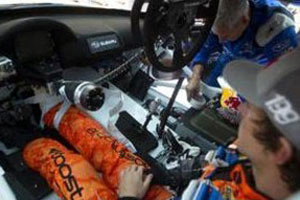 Though Travis Pastrana made his name in motocross, the legendary rider is now branching out into other forms of motorsports. Pastrana recently announced that he will be competing in the 2012 Global RallyCross Championship Series, signing on to drive a 2013 Dodge Dart in the competition.

The Dodge Dart Rally Car hasn't even officially debuted yet, although the car will be shown at the New York Auto Show next month, reports Cycle News. The new Dart reportedly produces a whopping 600 horsepower, so the former motocross star should have plenty of power once the season starts up. Pastrana says he's ready to go for the new season of rally racing.

"If you don't have the product to win, it's not worth going racing," Pastrana told the news source. "I love driving - this is going to be exciting."

Although Travis Pastrana seems to be focusing on four wheels nowadays, he has shown in the past that he can't quite leave motorcycles behind. Last year, Pastrana was forced to delay his heavily-anticipated NASCAR debut when he broke his ankle and foot while attempting a complex trick at the X Games. Pastrana is set to begin his NASCAR career in April instead, racing in rally cars at the same time.