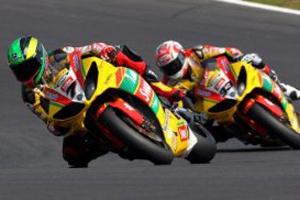 Now that the AMA Superbike series is officially underway, it seems as if the riders are almost always on the track. Just a few days after the last race ended, the Superbike competitors were at Homestead-Miami Speedway in Florida for early testing.

"I've been here before, I like it," said Bostrom. "In 1996 I won the Harley race here, so the track was semi-good to me then too. My first lap around here this year, I said 'I don't even remember this track.' It's crazy, I didn't remember it. But the bike is fantastic, nice comeback after Daytona; we had a really tough time there. Actually it sucked, let's admit it."

Young ultimately settled for fourth after Josh Hayes bested his Day 1 time as well, setting up an exciting weekend where it appears that four riders will be competing for the checkered flag.