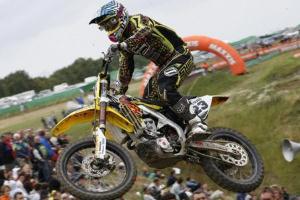 TwoTwo Motorsports Honda rider Chad Reed's current injury is not only expected to keep him out for the rest of the AMA Supercross season, but will also cause him to miss a portion of the upcoming AMA Motocross season as well. Fortunately, Honda will not be without a rider during this time period, as it was recently announced that the team would sign New Zealand competitor Ben Townley.

Townley is a personal friend of Reed and has significant motocross experience, winning the 2004 MX2 World Championship and the 2007 AMA Lites East Championship. The rider has been racing overseas for the past few years, but is now making a return stateside in order to fill in for his friend and possibly rejuvenate his career.

"We believe in Ben's talent and work ethic, and combined with the great crew we have at TwoTwo Motorsports, I feel we have the formula to not only represent our sponsors but also challenge, win races and compete for the number-one plate," said Reed. "I'm excited and I know the whole team is looking forward to getting back racing and supporting Ben."

The AMA Motocross season is scheduled to start on May 19 in Sacramento, California.