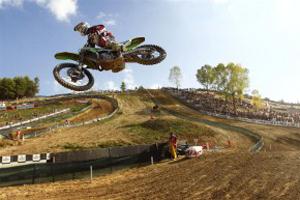 Last week, the 2012 Thor Spring Classic MX Championship was held at the MillCreek Motocross Park in Pell City, Alabama, for the second year in a row. The St. Clair Times reports this race is one of four major AMA motocross events of the year, and this is the first time the MillCreek Park played host to the races. Racer Alex McWilliams and a few cohorts had the championship's location changed from Lake Whitney, Texas, to the track built by McWilliams' father back in 2000.

"My family built this place from the ground up," Alex McWilliams told the news source. "We cleared the whole place, leveled it up and did everything... We went from running local Alabama races to holding regional races and getting national races. Some tracks that have been around for 30 years that are national known don't have this."

The news source reports people came from around the world to sign up for the event. Riders ages 5 to 60 registered to race, and some even had hopes of riding with the pros, like the Monster Energy Kawasaki Team Green. Monster rider Clark Stiles was the victor in the second moto of the 25+ expert class. Many other talented professionals took to the tracks as well.