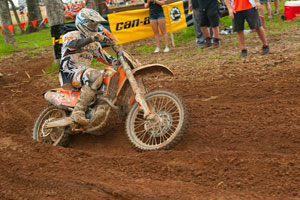 Russell had a rough start off the line coming around the first corner mid-pack. He quickly set to work to pick up some positions and was able to cross the one lap mark in 5th place. Meanwhile, his teammates Cory Buttrick and Charlie Mullins had both earned great starts and were sitting in 2nd and 3rd place respectively.

The next lap, reigning National Enduro Champion and Georgia native, Russell Bobbitt, made a miraculous climb through the pack to move into the lead. Unfortunately, he got stuck in a huge mud hole shortly after and lost valuable time and positions.

Bobbitt's holdup allowed Mullins a chance to move into the lead. The reigning GNCC Champion was able to hold the lead for the next three laps before a hard charging Russell was able to chase him down and make the pass for the lead. Russell held on to the lead for the final two laps and went on to take his second XC1 career victory by 28 seconds over Mullins. Buttrick was able to put in a solid ride to finish 6th and Bobbitt finished 13th. 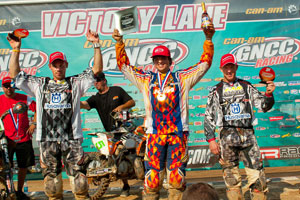 Maintaining her perfect streak was Factory FMF/KTM rider Maria Forsberg who won her second race of the season. Forsberg, who is an expert in the mud, was able to pull a commanding lead and won the race by over 5 minutes. Four of the top five female riders were aboard KTM motorcycles. 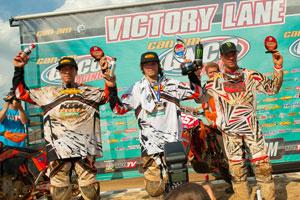 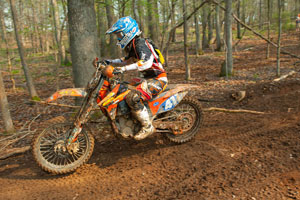