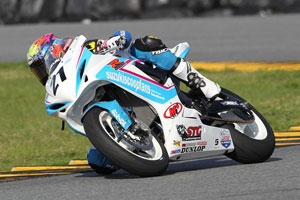 Not only did the young racer turn in a truly-inspired ride to take the win on her SuzukiScoopFans Suzuki GSX-R600, she also became the first female competitor to win a professional motorsports race at the famed Daytona International Speedway.

Eighteen-year-old Myers started the weekend by carding a front-row grid position during qualifying. In Friday's SuperSport race, she became reacquainted with the Daytona track and its notorious banking, running up front in a podium position for several laps before finishing a respectable sixth. Then, on Saturday morning, Myers pulled out all the stops and rode flawlessly on her SuzukiScoopFans Suzuki GSX-R600. Aggressively battling for a podium position all 10 laps, Myers waited until the final lap to put herself in exactly the right spot to take advantage of the Daytona draft and capture the win. 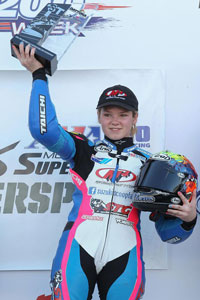 "I just won Daytona," enthused Elena Myers.
"I just won Daytona," enthused Myers. "Pretty crazy way to start the season off. I can't thank my SuzukiScoopFans team enough for putting a bike as good as the Suzuki GSX-R600 underneath me all weekend. Man, I didn't think I was going to do it when I was coming down the straight, but somehow I pulled it off. The craziness of Daytona! I was hoping to get a win this weekend and I can't thank Suzuki and my team enough for doing a great job."

Myers and the SuzukiScoopFans team started the 2012 season with a brand-new Suzuki GSX-R600, so Myers hasn't put in a lot of saddle time yet. This makes her winning result on Saturday even more impressive, for both rider and team.

"We've been trying to get the Suzuki set up pretty quick," said Myers. "I can't say enough about my SuzukiScoopFans team and my program. Today it was a pretty crazy race. I got a good start and led for a few laps, and a few guys came by me and I just tried to stay with them. It's been a while since I've been on the podium and it feels really good to be back up here. This is definitely a boost for my confidence."

The Team SuzukiScoopFans SportBikeGear.com Suzuki's next event of the 2012 AMA Pro SuperSport season is at Road Atlanta in Braselton on April 20-22nd. 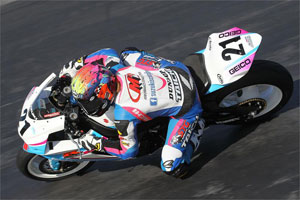 Elena Myers tucked into the cockpit and made herself as small as possible in the sprint for the flag.
Team Suzuki's Elena Myers claimed her second career AMA Pro victory in sensational fashion during Saturday's SportBike class aboard her GSX-R600 at Daytona International Speedway in Florida to become the first-ever woman to win a professional motorsports event at the venue.

The 18-year-old SuzukiScoopFans Sportbike TrackGear.com M4 rider got her revenge for Friday's race in which she fought for the win but got shuffled back in the draft on the final lap. On Saturday, she altered her strategy, putting her GSX-R600 at the front of a four-rider lead pack as they raced up onto the banking for the final time.

Myers tucked into the cockpit and made herself as small as possible in the sprint to the chequered flag. The decision paid off as her rivals proved incapable of drafting by her, Myers scoring the win by 0.240 seconds. 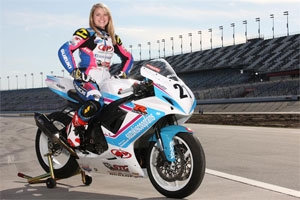 "I just can't thank my team enough for giving me such a great bike this weekend. They put the greatest machine under me. I'm so happy to get a win for them. It's a great feeling and nothing compares to it."
- Elena Myers
Said Myers: "These guys were super-fast all weekend and they ran a great race. I was just trying to stay with them. Yesterday I got the short end of the draft and I was happy today there were only four of us up in the lead pack instead of eight.

"It was good just to have a few of us up there, just going back and forth. It was a phenomenal race. I stayed up there and led a little bit, then stayed behind just to see how much I could be behind and still catch up. Everyone's bikes were really fast but mine was too.

"I just can't thank my team enough for giving me such a great bike this weekend. They put just the greatest machine under me. I'm so happy to get a win for them. It's a great feeling and nothing compares to it. That's why we come here and do what we do; to stand on the top of the box."

M4 Broaster Chicken Suzuki's Dane Westby overcame adversity to secure a top-five finish in the 71st running of the legendary Daytona 200. The Oklahoma rider showed remarkable speed in the race, leading laps aboard his GSX-R600 Daytona SportBike machine during his opening stint. He further impressed by tracking down the leaders from several seconds back to arrive in the lead once again prior to his second pit stop. 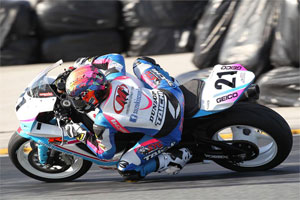 Elena Myers claimed her second career AMA Pro victory in sensational fashion.
However, the team encountered an issue during his second stop, a setback that ultimately hurt his chances for the win. Westby continued to fight and eventually came home in fifth position at the conclusion of the arduous 57-lap contest.

Said Westby: "I was really happy with the pace I could run. I was able to make up a lot of the deficit and I think I'm gaining a lot of knowledge and confidence."

Still returning to peak form following an injury-hit 2011 season, Ulrich battled for a top-10 position and claimed a close 12th in the 15-lap affair.

Ulrich said: "It was another positive race. We got to dicing in there during the race and now we've got two races and 30 race laps under our belts. We banked two races and picked up some points and we'll build from there. I'm looking forward to going to Atlanta and continually improving and going forward the way we should be. Last year if I would have left Daytona with a 11th and a 12th it would have been the end of the world, but this year I'm quite pleased." 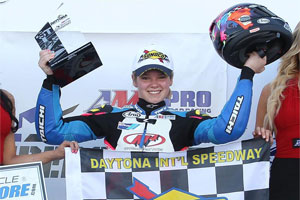 Elena Myers became the first ever woman to win a professional motorsports event at Daytona International Speedway.
Team Venezuela's Robertino Pietri, with assistance from Team Hammer Contract Services, earned strong results in both AMA Pro Superbike races in Daytona. 'Tino was an impressive eighth on Friday and followed up with another top-10 on Saturday.

Homestead-Miami Speedway will host an official AMA Pro Road Racing test next week, and the 2012 Championship will resume with Round 2 at Road Atlanta on April 20-22nd.