Ryan Villopoto Closes In On Championship With Indy Win 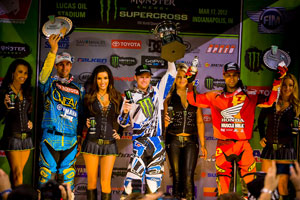 Villopoto struggled a bit throughout the race, but was eventually able to make his way to the front and get the victory, passing Justin Brayton with five laps to go. Villopoto later said that the win was his toughest so far this year.

"This was by far the hardest track of the season," said Villopoto. "It was slick out there, and I had to be on my game. It was tough to make passes on this track."

However, the bigger story is what has happened to Villopoto's top competition. James Stewart was thought to be the only rider who could really challenge Villopoto, but he banged his head during a crash in practice. Although he was wearing a motorcycle helmet, Stewart sat out of the race and thus allowed Villopoto to add 25 points to his lead.

The rider in second place overall, Ryan Dungey, is still on the shelf with an injury and could likely be done for the year - leaving no one else with a realistic chance of catching Villopoto. 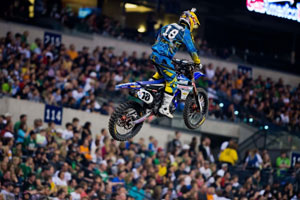 Millsaps battled with Brett Metcalfe and Mike Alessi behind points leader and defending Champion Ryan Villopoto across what was a tight and slippery course deep in America's motor racing mecca. The 24 year old was without team-mate James Stewart after the Daytona winner (seven days previously) crashed in practice and appeared to suffer a slight concussion. After consulting with the medical crew at the track and also his team, 'JS7' sat out the Last Chance Qualifier and therefore withdrew his first main event of the year.

"There's nothing really too serious," said Team Manager Jeremy Albrecht. "He did hit his head and he probably could have rode but we're just trying to be smart. If it was for a championship maybe that would have been worth it but really we've got to come back next week and he just needs to win some races. It's cool to see Davi get on the podium. Now Davi is fourth and James is still 3rd in the series so we're not doing too badly. It obviously isn't the year we wanted with James but we have some won some races and there are still a lot left."


"I'm very sore and will get checked out when I get back to Florida. Bummed 4 my team and fans."
- James Stewart, via his twitter account

"I'm very sore and will get checked out when I get back to Florida. Bummed 4 my team and fans. Still trying to put what happen last night together." Stewart communicated through his twitter account.

"I'm not going to complain," said Millsaps. "I worked hard and I got up there. Windham went down and that was a bummer because that looked like a hard crash. I just kept pushing, kept pushing and came to a podium spot. So, I'm pretty pumped on it. Metcalfe and I got in a little battle; Alessi and I also. But I came out on the better half and that's all I care about."

Stewart is still third in the standings but any realistic chance of the 2012 SX crown is ebbing away with a 69 point gap to Villopoto. Stewart still needs 16 points to overhaul Ryan Dungey (also currently side-lined through injury) to reach second place. Millsaps is now fourth and 26 marks behind.

Round twelve will take place at the Rogers Centre in Toronto for the sole non-American stop on the schedule. 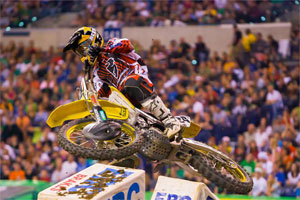 Going into his eight-lap heat race, the Australian came off the gate and got the holeshot, and then he held onto his lead to take victory.

Said Metcalfe: "We came in with a different approach with bike set-up this weekend and it was evident in my first lap of practice: I just felt so much-more comfortable and could really attack the track and ride the bike. I was really stoked; the Yoshimura Suzuki RM-Z450 was running great. We got great starts and qualified the best we have all year. In the heat race we ripped the Holeshot and it felt awesome to get out there in front. I was able to hold on and get my first heat win of my 450 career. That was a big achievement for me."

In the 20-lap Main, Metcalfe continued to charge hard after getting another good launch, rode aggressively and battled for a podium position for the entire race, running as high as second place before succumbing to a bit of fatigue and finishing fourth. 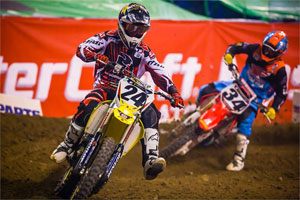 Brett Metcalfe and the Yoshimura Suzuki squad hope to build on their momentum as they head toward Canada next weekend.
"In the Main, I got another good start on the Yoshimura Suzuki RM-Z450. I came out of the corner about third or fourth. Then I was able to charge through and get up to second and ran up there for half the Main Event. Then I dropped back a few positions because I got tired holding everybody off, but I was fighting as hard as I could."

Metcalfe and the Yoshimura Suzuki squad hope to build on the momentum of their first Supercross heat race win and solid Main Event result as they head toward the series' next stop in Canada next weekend.

Added Metcalfe: "This weekend in Indy was a good start for us with the new set-up for the Yoshimura Suzuki RM-Z450. I'm looking forward to carrying this on to Toronto next weekend and I'm really stoked about that."

Team Yoshimura Suzuki Racing's next event is the 12th round of the 2012 AMA/ FIM Supercross Championship on Saturday, March 24th, at Rogers Centre in Toronto, Ontario, Canada. 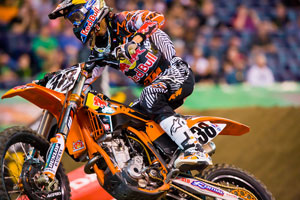 Musquin had a decent heat race starting inside the top ten. After the eight lap race, he had climbed up a few positions to move into 6th place and easily qualify into the main event.

In the main event, Musquin had a great jump off the gate and rounded the first corner in 3rd place. He held the position for a few corners before dropping to 4th. He maintained the 4th place position on his KTM 350 SX-F machine for the next two laps while holding off the charge of Ryan Villopoto. A lap later, Musquin lost the position to Villopoto and another small mistake cost him one more position. Once he had settled into 7th place he began to find his rhythm and rode a strong race. Musquin was able to hold his 7th place result for the remaining laps to finish in that position when the checkered flag flew. 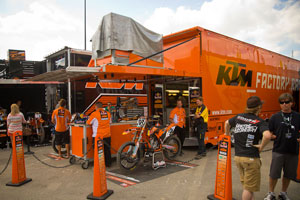 Musquin's teammate, Ryan Dungey, missed his second race of the season as he continues to recover from his collarbone surgery. Despite missing two rounds of the series, Dungey still holds 2nd place in the series point standings.


Blake Wharton Gets The Win After Rare Restart 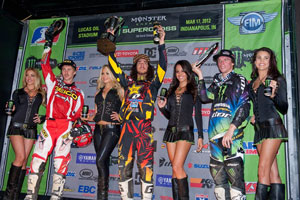 Ken Roczen built up an early lead in the race and was out in front by a large margin after the first five laps. However, Kyle Cunningham's crash led to a rare red flag, meaning the race would be stopped and then restarted with the riders in their current positions. While Roczen got to start in first, his big lead was now gone.

Wharton and Blake Baggett benefited the most from this, as they started in third and second, respectively. Wharton quickly charged around Baggett and challenged Roczen for the lead. He eventually passed him and Roczen ended up crashing shortly thereafter, resulting in a disastrous 16th place finish.

"I am very thankful to everyone that got me here," said Wharton. "It was a strange start after the red flag, but it was great for me. I didn't look up until I saw the white flag, and once I saw it, I knew I had to ride smart for one more lap."

Darryn Durham and Justin Barcia rounded out the podium, with Baggett falling back to fourth. 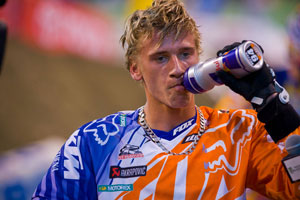 Roczen had a great qualifying time in the morning practice sessions to earn first gate pick for heat number one. He got off to a 5th place start and quickly went to work cutting through the field into the front of the pack. By the start of the second lap he was 3rd and a few turns later he had moved into 2nd behind Darryn Durham. Roczen quickly reeled Durham in and the two swapped the lead on the final lap with Durham just edging out Roczen for the win.

In the main event, Roczen finally received the start he needed as he pulled the holeshot around the first corner. He battled with Blake Baggett for the first two laps before making the pass for the lead stick. He quickly stretched out his lead and had a 1.3 second gap over Baggett by the fifth lap. Unfortunately, it was on the fifth lap that the AMA officials put out the red flag instructing all riders to return to the start line.

The official AMA rulebook states that if the race is red flagged after 3 laps then the riders will start in a staggered fashion based on the running order they crossed the finish line in on the lap prior to the red flag. Since Roczen was in the lead at the time, he was able to start in the front of the staggered line. Although the AMA rule for the staggered start has been in place for quite some time it is the first time in professional racing history that they have used it. 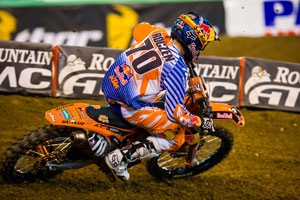 Although in front of a historic staggered restart, Ken Roczen ended 16th overall due to a crash in the main event - Photo: Hoppenworld.com
At the wave of the green flag, Roczen launched off the line and quickly pulled out front to gain back the lead he had. Two laps into the restart, Roczen made a small mistake coming around a corner and crashed. His bike was damaged in the crash and he had to return to the mechanics area for a quick fix before returning to the track. He reentered the race over a lap down and despite turning fast lap times throughout the duration of the race he finished 16th.

After the race Roczen commented, "I'm not sure what to say about tonight. It was a crazy night. I haven't crashed in a main event all season and I am really bummed that my only main event crash came while I was leading. I know I am riding well right now so I will just regroup and hope to get my first season win in Toronto."