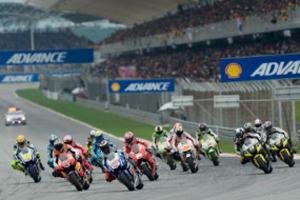 Technology is progressing at a rapid pace, and the rise of mobile smartphones now enables people to get information just about everywhere. One of the more useful features of smartphones is the ability to keep tabs on live events, and AMA Pro Racing is allowing fans to do just that with their new applications.

The racing organization has announced a new update to its two apps on the market - AMA Pro Road Racing [iPhone] - [Android] and AMA Pro Flat Track [iPhone] - [Android]. Both of these applications allow users to track races with live timing and scoring data for every race in both series. These applications also have a Pro version for 99 cents that expands the functionality and allows access to archived results, detailed schedules, point standings and much more.

Both applications have now been updated with new features. The biggest addition is social media integration. Users will be able to catch up with the latest news from Facebook and Twitter without leaving the app, and they'll also be able to share information through their own social media accounts. This will allow the user to keep tabs on their favorite riders and teams without having to launch a separate application.

The applications are available now on both iPhone and Android.