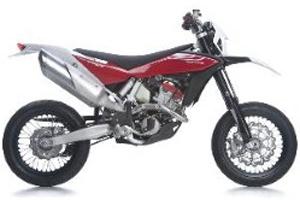 Husqvarna has always stuck to racing bikes, producing quality motocross, enduro and supermoto motorcycles, but they recently debuted their first street motorcycle in 80 years - the Nuda 900. The company also offers a higher-end variation, the Nuda 900 R.

The bike manufacturer took a nod from its parent company, BMW, when designing the Nuda, as the design of the engine and frame are loosely based on the BMW F800GS, according to Cycle World. The engine is a liquid-cooled 900cc DOHC parallel twin that generates 105 bhp, and is based on the BMW F 800 R motor.

Motorcycle Daily recently had the chance to test both bikes, and reported that each provided an exhilarating, fast-paced experience. The 900 R rode like a lightweight supermoto bike with better stability and more power, the news source reports, but they claimed the Bremco brakes felt a bit too powerful for a street bike.

The standard 900 model was found to be a comfortable ride with a slightly lower seat, but the news source reports it would not be a suitable replacement for a touring motorcycle. Both models were found to have decent fuel economy. As it stands right now, the Nuda models are not available in the U.S., but Cycle World predicts they may come to American shores if they are successful in other countries.