Ryan Dungey Out For Daytona 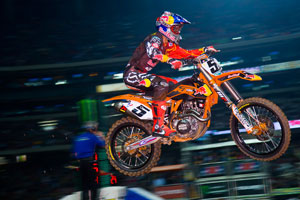 KTM Motorsports is saddened to report that Red Bull/KTM Factory rider Ryan Dungey will sit out the Daytona Supercross after undergoing surgery this week to repair a broken collarbone.

Dungey, who currently sits second in the series point standings and has collected two Supercross class wins this season, suffered what was initially diagnosed to be a cracked collarbone when he slid out in a turn and landed on his shoulder while practicing at his training facility in Florida prior to the St. Louis Supercross.

Following the crash, Dungey felt sore but was determined to continue vying for his second Supercross title and KTM's first-ever US Supercross Championship. In a heroic effort, he managed to finish runner-up at the St. Louis Supercross. Further evaluation by Dungey's doctor this week found his collarbone to be broken. Dungey chose to undergo surgery on Tuesday afternoon to plate the collarbone in hopes of a healthy return to racing as quickly as possible.

"This is hard for everyone on the team," remarked Red Bull/KTM Team Manager Roger DeCoster." Ryan has done an amazing job adapting to a completely new bike this year. Through the process he has won two Supercross races and has finished on the podium at seven of nine races. He was well in the thick of the championship hunt at the midway point in the series." 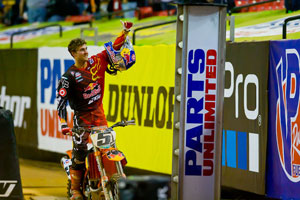 DeCoster continued, "It is often heard around the pits that Ryan needs to get more aggressive and tougher on the track; I am guilty of this prediction myself. But after what he accomplished last week racing to a close second with a broken collarbone; my doubts about how tough he is are well and truly gone. We knew he was hurting but we did not realize his injury was that extensive. His gutsy performance in St. Louis and determination to keep racing despite his injury is a testament to his dedication to the team."