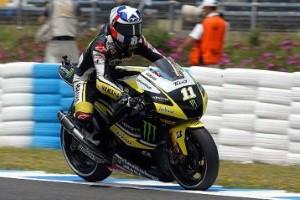 Casey Stoner and Dani Pedrosa had the fastest times on the first day of testing, with Yamaha's Jorge Lorenzo and Ben Spies in third and fourth, respectively. Stoner looked as dominant as he did one month ago when the teams were testing in Sepang before the season began, although he did not break his best time.

However, the Honda riders were sidelined for the second day of riding after Pedrosa suffered an unexpected engine failure. Puzzled by the breakdown and wanting to make sure their riders were safe, the Honda team stopped all tests until they could hear back from the factory. By the time the team was cleared to ride, rain had set in on the track.

While things were dry, however, it was the Yamaha team that took advantage. Spies had the best time of the second day, and his teammates Jorge Lorenzo and Andrea Dovizioso were just fractions of a second behind him. Interestingly, all three riders posted better times than Stoner did the day before, suggesting that they may have ended up at the top even if the Honda riders had tested.