Steward Baylor Makes It Two In A Row 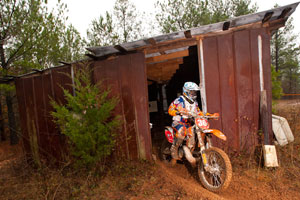 Consistency paid off for Baylor as he was the only rider of the day to finish inside the top three in all six tests. Baylor took the test win at the second and sixth test setting a blazing pace that kept the other riders from taking over the lead. This win made two in a row for the young rider who now leads the series by 14 points.

Factory FMF/KTM Team rider Cory Buttrick put in a solid ride to finish 2nd overall for the day. The battle for 2nd place was tight between Buttrick and his teammates Russell Bobbitt and Charlie Mullins plus Husaberg rider Mike Lafferty. Between every test the riders swapped positions and always remained within a few seconds of each other. At the end of the day Buttrick came out on top of the battle after putting in two solid rides in the final two tests to edge out Lafferty by 9 seconds. Bobbitt, who took one test win, and Mullins who nabbed three test wins, went on to finish 4th and 7th respectively. 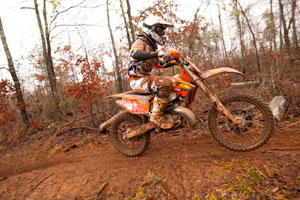 Cory Buttrick put in a solid ride to finish 2nd overall for the day - Photo: Shan Moore
"I felt really strong today and am happy I was able to walk away with three out of the six special test wins," remarked Mullins. "Unfortunately, my rear brakes went out on the final test and I had to take it easy to make it back in one piece. The final test was 14 miles and the muddy conditions took a toll on my brakes. Its just part of racing but I'm glad I made it back safe and I can look forward to round three."

Factory FMF/KTM Team Manager, Antti Kallonen, stated, "We are very happy for Baylor. He is riding very well right now and we are excited to see his improvement from last season. This was a great performance for Buttrick, Mullins showed he has the speed to run up front and Bobbitt is healing well from his injury and was much closer to the pace of the top guys this weekend. I think this is shaping up to be a great season and we are excited for the next round."

In her first National Enduro appearance of the season, Factory FMF/KTM rider Maria Forsberg took the win in the Women's Pro class. "The race was a lot of fun today. I am from Washington so I'm used to riding in the rain. I am very excited to walk away with the win," stated Forsberg. 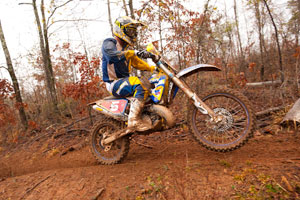 Muddy conditions plagued the riders throughout the day and caused for many bike issues and lost positions for most riders but not for Mike Lafferty and his two-stroke Husaberg TE250. "My bike was flawless today," remarked Lafferty. "It was a hard race and very easy to make mistakes because of how slippery the terrain was, but I made it through and am happy to finish on the box."

Lafferty had a strong showing at this round finishing within the top five in each special test and really turning it on at the final test section where he was able to finish 2nd fastest. His final test section was enough to push him into podium position. Now two rounds into the series he sits second in the point standings just 14 points behind series leader Steward Baylor. 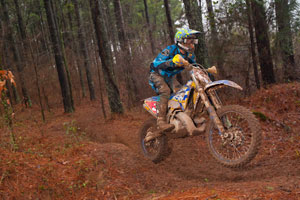 Nick Fahringer had a much stronger showing this time around - Photo: Shan Moore
Lafferty's teammate, Nick Fahringer, had a much stronger showing at the second round returning home with a 6th place finish. "I am still recovering from my ACL injury but each ride is getting easier and I am confident I should be back up to speed within the next few weeks," stated Fahringer after the race.

The riders will now have a two week break before heading to the third round of the series which will be held in Salley, SC on March 4, 2012. 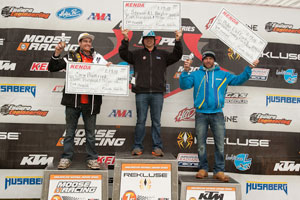 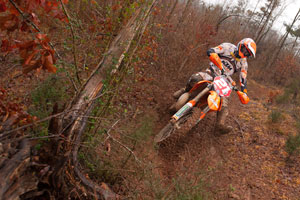 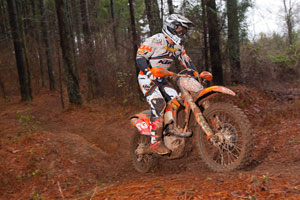 Charlie Mullins is 4th in points despite taking 7th in round two of the National Enduro - Photo: Shan Moore 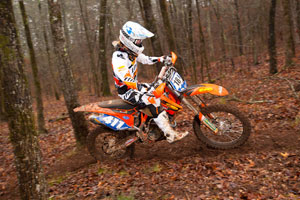