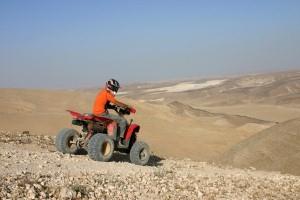 The King of the Hammers is one of the more unique and prestigious off-road races in motorsports, and this year was no different. Held over the course of a day in the desert of Lucerne Valley, California, this unique race challenges riders to custom-build their own machines designed to tackle both open desert racing and tough rock-crawling sections.

Over 130 competitors showed up to compete for the $25,000 grand prize, but in the end Erik Miller crowned the 2012 King of the Hammers. Miller became the first racer from the East Coast to ever win the event.

"There are one thousand opportunities to make mistakes out there," Miller told Dirt Newz after the event. "And we just try to make as few as possible."

Second place was taken by Rick Mooneyham, who has been one of the more consistent competitors in the race, placing third and fourth several times over the year. However, Mooneyham has never been able to put it all together and win the race outright. Last year's King of the Hammers, Shannon Campbell, took the third spot on the podium.

The event also featured a UTV race using non-custom vehicles, which was won by Mitch Guthrie in his Polaris RZR XP. In fact, riders using the impressive RZR occupied four of the top five spots in that particular race.