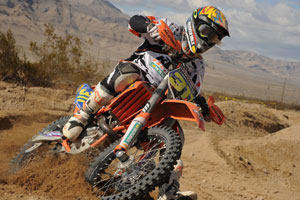 Factory FMF/KTM rider Mike Brown took his first win aboard the new 2012 KTM 450 SX-F Factory Edition motorcycle at the second round of the WORCS held in Primm, NV.

The two day event was held just around the corner from the famous Buffalo Bill's hotel and casino. The course conditions were rough and dusty for day one. Off the start, Brown nailed the holeshot and led the first two laps before he suffered a crash which dropped him to 4th place. He spent the next half of the race catching back up to the 3rd place ride of Kyle Summers. Once Summers was within his sight, Brown entered into a three lap long battle with Summers until Brown made the pass stick and went on to finish on the final step of the podium.

On day two, Brown had another decent start, this time he came around the first corner in 3rd position. On the fifth lap, Robert, who was leading the race, broke down which allowed Brown to move into 2nd place behind Justin Soule. He was able to reel in Soule with a few laps to go to take over the lead. He had pulled to a decent gap but ran into trouble on the final lap of the race when he suffered a crash that allowed the 2nd place rider to catch back up to him. Brown recovered and charged hard the last half of the final lap to take the win over Gary Sutherlin by three seconds. Brown's 3-1 moto scores earned him the overall for the day and the first win for the KTM 450 SX-F Factory Edition bike in the WORC Series. 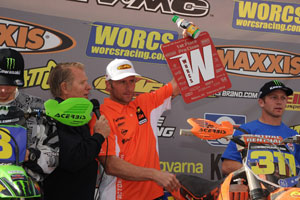 Brown was really happy with [the bikes] performance and that showed in the result - Photo: Kinney Jones

Factory FMF/KTM Team Manager Antti Kallonen, reported, "Overall it was a great debut for the new bike. Brown was really happy with its performance and that showed in the result. The track was very tough on the riders and the bike this weekend and it was a great testing ground for the new machine. We had no problems and are really happy to leave the second round with the points lead."

Kailub Russell also returned to the WORCS Series for the second round. He suffered a bad crash during Saturday's moto while running in 8th place and chose to sit out the rest of the moto in order to be ready for Sunday's main event. His plan worked and he turned in his best performance in the series with a 6th place result in Sunday's main. His 14-6 results earned him 10th overall for the weekend.