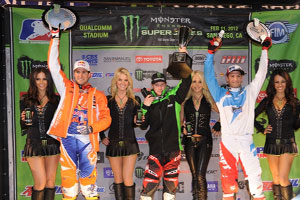 Ryan Villopoto won two in a row - Photo: Hoppenworld.com
After a schizophrenic start to the season that saw four different riders win the first four races, defending champion Ryan Villopoto settled down with his second-straight win of the year and third overall in San Diego.

It wasn't an easy win for the Kawasaki rider, however, as he was pestered by Australian Chad Reed during the entire race. Villopoto was the faster rider on most of the track but noticeably slowed a bit on the long whoops section, which Reed excelled at. That meant that the race had a back-and-forth quality - Villopoto building his lead only to have Reed catch up on the whoops to keep things competitive.

When the two riders began to lap others on the track, things got a bit tricky. With Villopoto forced to slow down to avoid another rider, Reed was able to sneak past and take the lead late in the race. However, the defending champion didn't back down and was able to snatch the lead back before the end, resulting in a thrilling finish.

After two races with no place on the podium, Ryan Dungey was happy to get back on in third place, but never seriously challenged Villopoto or Reed. The only other rider who has won a race this season, James Stewart, got some of his motorcycle apparel caught on his gear and had to be cut free, resulting in a fifteenth place finish.


Ryan Dungey Lands On The Podium At San Diego Supercross 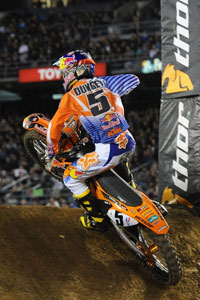 Dungey was placed in the second Supercross class heat where the first attempt at the heat race was red flagged after three laps. On the restart, Dungey came around the first corner in 2nd place and began a battle with James Stewart throughout the remaining laps for the position. On the final corner, Dungey attempted a block pass to try and steal the position from Stewart but fell short of making the pass and finished a solid 3rd place overall.

In the main event, Dungey lined up in a similar gate to his heat and earned another impressive start. He was within the top five around the first corner but made a small mistake in the first rhythm section and fell back to 5th place. He remained in the 5th spot for the first seven laps of the race, chasing the pack ahead of him. On the seventh lap of the race Stewart went down handing Dungey 4th place and then Dungey made a quick pass on Brett Metcalfe to move up an additional spot. Once in podium position, Dungey maintained his pace and held on through the checkered flags to secure the podium spot. 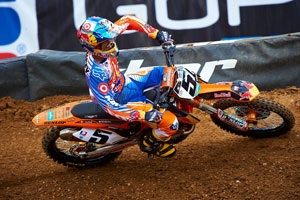 Ryan Dungey now sits 3rd in the points chase - Photo: Hoppenworld.com
"I struggled a little bit tonight in some sections and it held me back from fighting for the top spot. Overall, I am glad I was able to get on the podium and salvage some points but I need to battle for the win to help my fight in the championship chase. I am looking forward to heading east and hoping to run up front next weekend," remarked Dungey. 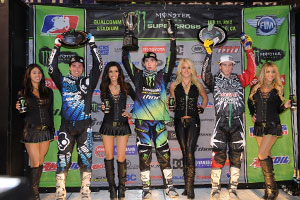 Supercross Lites Winner's Podium - Photo: Hoppenworld.com
Eli Tomac went into the San Diego AMA Lites Supercross with a comfortable overall points lead, but was beaten soundly by Dean Wilson, who took over control in the standings.

Neither rider grabbed the holeshot - that honor went to Vince Friese, who had a strong start to the race. However, Wilson was able to get by Friese and didn't really look back the rest of the night, riding to an easy victory.

Tomac, meanwhile, started out in the middle of the pack and had to work hard to get toward the front. He eventually battled his way to third place, but then crashed during the particularly tough whoops section, which gave many racers trouble. Tomac wasn't able to finish the race, which allowed Wilson to pass him in the overall standings. Cole Seely and Matt Moss rounded out the podium.

"I'm absolutely ecstatic with the win," said Wilson. "I knew I needed to run consistent laps out there and get through the whoops as fast as I could all night long. Eli [Tomac] is a tough competitor, so it's a bit of a surprise to be in the points lead, but I'm going to work my butt off during the break to try and stay there."

Wilson is now just two points ahead of Tomac as the series goes into a break before the next race. 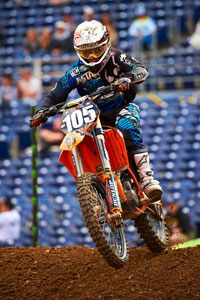 The reigning Australian Lites Supercross and Motocross Champion jumped onto the radar after earning a 5th place result at the Oakland Supercross event which marked the JDR/J-Star/KTM teams best overall finish at the time. Two rounds later he successfully broke his own record and showed he can run with the best in his class after earning his first U.S. Supercross Lites podium spot in front of the San Diego crowd.

Moss started the night off well earning 3rd overall in his heat race after closing in on Red Bull/KTM rider Marvin Musquin. Moss had a great gate pick for the main event which paid off huge when the gate dropped for the start of the 15-lap main.

Moss launched his KTM 250 SX-F off the line to a 2nd place start around the first corner. He remained in the runner-up position for the first three laps before Cole Seely made a pass to takeover the position. Moss surrendered one more position a lap later to point's leader Eli Tomac before setting into 4th place. Moss never tired and remained close to the lead group and put his KTM in a great place to take over the final podium spot once Tomac crashed near the halfway point. Moss quickly moved into the position and rode a steady race for the remainder of the event to secure his and his team's first U.S. Supercross Lites podium.

"It feels so good to get on the podium tonight. I have worked so hard and have always dreamed of racing in the U.S. and it feels so amazing to finish on the box and advance my ranking in the points chase. I couldn't do this without the continuous support of everyone involved on the JDR/J-Star/KTM Team and I extend my deepest thanks to them," remarked Moss. 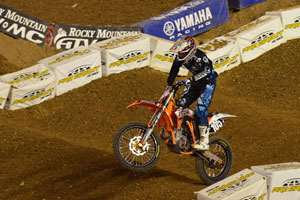 Matt Moss rode a steady race - Photo: Hoppenworld.com
JDR/J-Star/KTM Team owner Jay Rynenberg was equally excited, remarking, "It's been a long road getting to this point. Everyone on the team has worked incredibly hard to advance our team and it is very rewarding to see the pay off. Moss had a few bad years in a row and we picked him up a year ago and built him back up in Australia and now we are standing behind him in the U.S. He is a very dedicated and hard working rider and I am very proud of him and the team."

The AMA West Lites Supercross Series will now take a break while the series heads to the East coast. Malcolm Stewart and PJ Larsen will compete for the JDR/J-Star/KTM Team on the east while Moss will return to racing action on April 21, 2012 when the Supercross Series returns west for the Seattle Supercross. 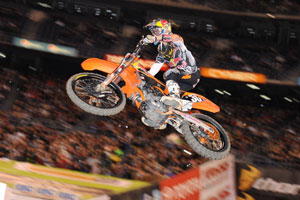 Marvin Musquin crashed but recovered and salvaged some points - Photo: Frank Hoppen
Red Bull/KTM Factory rider Marvin Musquin suffered a hard crash in the AMA West Supercross Lites main event held at Qualcomm Stadium but recovered to return to action and salvage a 16th place finish at the sixth round of the series.

Musquin impressed the sizeable crowd in his heat race earlier in the day where he earned a great jump off the start and came around 2nd in the first corner. He maintained his position and finished 2nd in his heat to easily secure a top spot in the main event.

Once in the main event, he got pushed back off the start and came around in 7th place after the first corner. He quickly moved himself toward the top five on the first lap before suffering a huge crash in the back rhythm section. Musquin fell hard and took a moment to recover. Once back on his bike he had to return to the mechanics area to make some adjustments and then he returned to action one lap down. He quickly set to work to try and pick off any riders he could and by the end of the event he had worked his way up to 16th place. 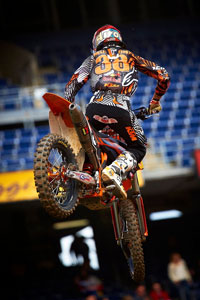 Marvin Musquin is only 12 points away from 3rd overall - Photo: Frank Hoppen
"This is definitely a disappointing race because I lost a lot of points toward the championship. The good thing is I walked away uninjured and will not be set back at all from my crash. I plan to race a few east coast rounds on the KTM 350 SX-F and I am looking forward to those races and mixing it up with a new class of riders," stated Musquin after the race.

Musquin has confirmed that he will race both the St. Louis and Daytona Supercross races in the premier class and possibly one other round as well. The series will then make a return to the west coast in April when the riders head to Seattle, WA on April 21, 2012.