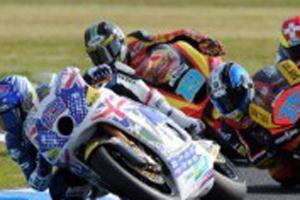 It's always interesting when a new rider makes the jump from Moto2 to MotoGP, as it could herald the arrival of a new contender. All the current superbike stars had to work their way up the motorsports rank at some point, and that journey is just beginning for Stefan Bradl.

Bradl won the Moto2 championship last year, which is the tier of racing just below the MotoGP premier class. Rather than stay back and defend his title, Bradl jumped at the chance to join the LCR Honda team and make the switch to MotoGP.

Bradl is racing on the Honda RC213V, the same model that Casey Stoner used to top the standings in the second day of testing at Sepang. However, Bradl still clearly has some learning to do as he adjusts to the MotoGP competition. Although he improved on his time the second day, Bradl was in eleventh overall on both days.

Although he's not at the front of the pack just yet, the rider was still positive about his first rides.

"Today has been a full day of work for me and the guys," Bradl said. "We made some good steps forward, including in our "to do" list suspension regulations, chassis geometry adjustments and some electronics. I found the bike easier to ride and my fastest lap time came early in the morning and I was very pleased with that."