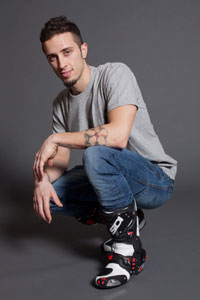 Sidi Vortice boots with the Italian pilot from Team Tech 3 Yamaha
Andrea Dovizioso has officially joined the stables of Sidi champions. The Italian rider recently visited the Sidi headquarters in Maser (Treviso) Italy before taking off for the Malaysian circuit in Sepang, where he'll face his first tests on his new official Yamaha supplied by Team Tech3. It was an occasion to meet the Sidi staff who'll be following him closely on this new adventure, so Dovizioso could familiarize himself with the new [mageProductLink sku="1407.0704" title=""]Sidi Vortice boots[/mageProductLink] he'll be wearing for the 2012 World Championship series.

Dovizioso was born in 1986, in ForlÃ¬ Romagna, and he's been proving his talent since his debut in world motorcycling in the 125 class in 2001. Race after race he's managed to climb his way up quickly in the rankings, gaining plenty of experience and maturity season after season. Then in 2004 things really started to come together when he captured the 125cc World championship Title, plus five more victories, five second places, a third place and eight pole positions. The World Title was an important calling card that gained him entry into the 250 class (now moto2) in 2005, which immediately confirmed him at the highest levels when he closed out the Worlds in third place in the general standings. Then in 2006 he clinched two more victories, with another two successes in 2007. In 2008 these brilliant results propelled him to his big leap to the MotoGP, the reigning class in world motor cycling. Right from his debut, during his first race in Qatar, he came in fourth place immediately on the heels of Valentino Rossi. It was a great premiere performance for a rookie who soon turned out to be a surprise on the World circuit, even making it to third place on the podium for the race in Sepang. In 2009 he clinched his first victory in MotoGP in the Great Britain GP. This important success was the tenth in his career, which made him one of the few active riders on the World circuit to obtain victories in every category he raced in. In 2010 he was firmly established in the top group and in 2011, although he didn't score any wins, he finished the World series in third place with seven podiums (second place four times and third place three times).

For Dovizioso 2012 will be an important year. After a long career riding for Honda, he's starting off on a new adventure with Yamaha, in pursuit of new motivation and excitement so he can return to the top step on the podium. In his quest for this prize he can count on Vortice boots, the top of the line in Sidi's race collection. 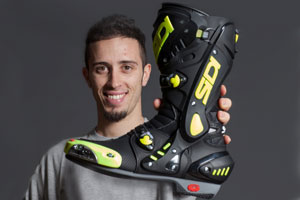 Dovizioso's team mate on Team Tech 3 Yamaha will be Englishman Cal Crutchlow, who is another champion from the Sidi ranks. Just one more source of pride and satisfaction for Sidi, who can now count on a formidable pair of warriors in Vortice boots as they battle for the Moto GP prize.


Welcome to our big Sidi family!

"As part of our vocation Sidi has always been close with our athletes," explains Rosella Signori. "After a fabulous period spent next to a motorcycle great like Loris Capirossi, now Sidi is proud to announce our partnership with another moto star, Andrea Dovizioso, one of the most outstanding riders of his generation. For Sidi, Andrea is an important testimonial not only for an Italian market, but also on an international stage. Technical skills, guts and a charming smile make Andrea one of the best known and admired faces in the world of motorcycling. With 51 years in the service of great champions, Sidi has decided to apply our know-how and passion to Andrea's professionalism, with the aim of creating a winning duo that will be easily recognizable to fans. And as a bonus, Andrea will contribute to the process of product development that has always made up Sidi's DNA."