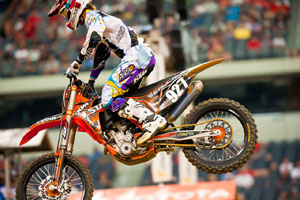 JDR Motorsports announced yesterday that JDR/J-Star/KTM team rider PJ Larsen had returned to riding for the first time since injuring his hand one week before the AMA West Supercross Lites Series kicked off.

Larsen, who has taken the past three weeks off from riding, began riding some local motocross tracks this week to evaluate the strength in his hand. "I feel really good on the bike already and was able to do some long motos earlier this week," responded Larsen. "I plan to ride a Supercross track at the end of the week and then dive into some heavy testing before the start of the East Supercross Lites Series in mid-February."

Larsen and his teammate Malcolm Stewart will both contend the AMA East Supercross Lites Series which will kick-off in Dallas, TX on February 18, 2012.