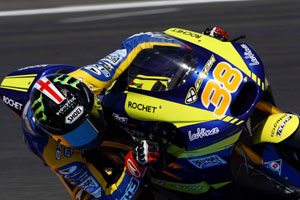 Bradley Smith in action last season.
A new rider has come to further enforce the ranks of the Sidi champions who will be lining up on the starting line in the 2012 season. We're referring to Bradley Smith, the Brit from Oxford born in 1990. Smith has renewed his contract for the next three years with the transalpine Tech 3 Racing team, with which he'll ride one more season in Moto2 and then move on to Team Monster Yamaha Tech 3 MotoGP in the following two seasons, 2013 and 2014.

The career of this young British talent is off to a brilliant start, and he's fast becoming one of the most interesting names to watch in the upcoming Moto2 championship series, the "cadet" category in which Smith and his team agreed he should stay in 2012 to gain some more experience and more importantly to try and capture the World Title before moving up to the reigning class of two wheel motor sports. This is an important goal. In this new and exciting adventure in pursuit of success, Smith can count on the support of Sidi, which has supplied him with their [mageProductLink sku="1407.0704" title=""]Sidi Vortice boots[/mageProductLink], which have proven themselves as the number one boot for the track and speed.

The Vortice is the top boot in the Sidi collection, a veritable technological and design gem with an attractive look that synthesizes cutting edge technology studied to provide maximum performance without sacrificing comfort and safety for the rider's feet.

Enthusiasm and determination are the foundations of this guy's personality; he's as aggressive on the track as he is polite, cordial and approachable when he's not on his bike. Like many of his colleagues, Smith also loves cycling; in addition to serving as a valuable tool in his physical training, it's also one of his greatest passions. This is one more source of pride and satisfaction for Sidi, whose core business consists of cycling shoes as well as motor cycling boots. When his competitive schedule permits, Smith doesn't miss a chance to hop over to the Dolomites to take on his friends in bike rides up the major climbs that have made history in the Giro d'Italia race.

Bradley Smith is a rapidly rising talent; in fact, in spite of his tender age, the young rider has already been standing out on the international scene. He debuted in the 125 class in the Moto GP in 2006 and stayed in this category until 2012, capturing three victories: two in 2009 which put him in second place in the final GP standings, and one in 2010. In 2011 he jumped up to the Moto2 category, which used to be the 250cc, proving his talent from the very start by making it to the podium three times, with a second and two third places; important placements that allowed him to close out the championship series in seventh place in the rankings and convinced him that he could go for the title in the next season, where he'll be lining up at the start with the drive to win, together with his Sidi Vortice boots.