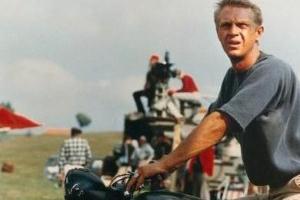 Triumph has announced the debut of three new motorcycles, including a limited edition model that bears the name of legendary Hollywood star Steve McQueen, reports Clutch and Chrome.

McQueen's taste for motorcycles is well-documented, and Triumph was one of the rider's favorite brands. He owned a heavily-modified Triumph Bonneville and even rode a Triumph Trophy at the 1964 International Six Day Trial.

The new bike is based off of a Bonneville T100, but carries the style of the military motorcycle McQueen used in the film "The Great Escape." The bike is fully licensed by the actor's estate and will retail for $10,000. Only 1100 models of the limited edition bike will be produced.

"We are so pleased to have these new models in our 2012 line-up," Heichelbech noted, "Consumer interest in these new models, in the form of deposits, has been tremendous, and we believe they will exceed expectations once they arrive."

In addition, Triumph is releasing the Tiger Explorer and Speed Triple R. The Explorer is the company's first entry into the adventure touring segment, and will boast a 1215cc powerplant. Meanwhile, the Speed Triple R is a high performance version of the existing Speed Triple, offering features like anti-lock brakes and an Ã–hlins suspension at a higher price point.