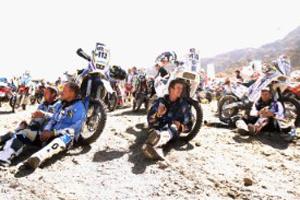 The Dakar Rally is always entertaining due to its length and the fact that almost anything can happen. Eight days into the race, it's been a duel at the top between Cyril Despres and Marc Coma. In the latest stage, Coma came out on top when Despres had a stroke of bad luck.

Coma went into the eighth day of racing nearly seven minutes behind Despres. However, the Frenchman caught a bit of bad luck just six miles into the stage when he became stuck in a mudhole. The frustrated rider watched his lead entirely evaporate just like that, as it took him eight minutes to free himself from the mud, allowing Coma to catch up.

Even worse, Despres did not have a strong performance after that miscue. He finished the eighth stage of the race all the way back in 14th and now sits a full 9 minutes behind Coma. Of course, Despres knows that everything can change in a single day, so he's far from out of the competition.

However, it does look like Despres' or Coma's race to win at this point. The rider in third place overall, Yamaha's Helder Rodrigues, is more than 50 minutes behind Coma.