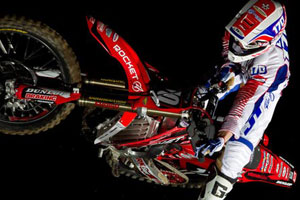 JT Racing is proud to announce that Michael Leib of the Eleven 10 Mods Honda team will be making his Lites West Supercross debut in JT gear! Leib spent last year in Europe racing the FIM Motocross World Championship, and is excited to be back in the United States racing AMA Supercross.

"I'm super-pumped to be back in the USA racing this year on factory level equipment," Leib said. "My training program with Randy Lawrence combined with Rocket Exhaust, Renegade Fuels, Factory Connection, JT Racing and Eleven 10 Mods ensures that I have a first-class program. The rest is up to me!"

Joining Leib in JT Racing gear in the 2012 season is a generous list of privateers. JT Racing-backed riders Dustin Pipes, Alex Ray and Conrad Weiland will be contesting the 450 Supercross class while Scott Champion, Scott Agostini and Noa Quinabo will join Leib in the Lites West Series. Adam McGill will contest the XC1 class of the GNCC series in JT Racing threads, and fellow off-roader Jeremy Joly will be racing the National Enduro series in 2012. 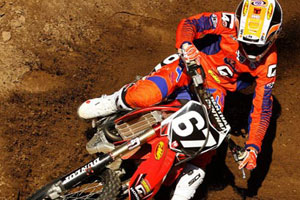 Lites West Supercross racer Scott Champion will also be flying the JT Racing colors this season. Photo by Chris Ganz
ABOUT JT RACING USA - Launched by John and Rita Gregory in the late 1960's, JT Racing ruled the motocross world for decades. It was the gear of choice for racing legends like Smith, Sun, Bayle, Vimond, Lechien and Bailey. For 2011, JT Racing returns to the sport it helped build with an innovative line of motocross gear: pants, gloves, jersey and a trick new helmet not only reminiscent of the ground-breaking ALS-2 of the early 1980's, but one that will make you rethink helmet technology entirely. With many past champions - Smith, Sun, Bayle, Vimond, Lechien, Glover, LaPorte, Lechien, Hansen and Tortelli are helping developing, testing and promoting the new line of gear, JT Racing is poised to unleash the style and innovation that will once again become the gold standard in motocross. JT Racing USA - History. Innovation. And heart.