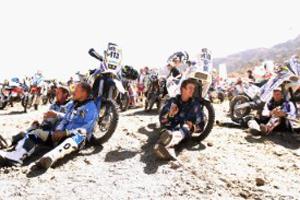 It's only two days into the 2012 Dakar rally, but last year's champion Marc Coma is already on top after taking the lead from Day One winner Francisco Lopez during a thrilling Stage Two.

Coma, who rides for KTM, started the day 14 seconds behind Lopez, but built up a large lead by the end of the stage. Coma beat the second-place rider, his KTM teammate Cyril Despres, by one minute and 18 seconds. Lopez, on his Aprilia, finished fourth during the second stage and now trails Coma by two-and-a-half minutes.

"The start of the special was very fast today," Coma told Cycle News. "Chaleco [Lopez] and me were riding at top speed and let me tell you, the Aprilia is very, very quick. After that, we arrived at the second part of the special with sand and dunes. It was a lot more technical, with some navigation to do as well. I took the lead and kept riding at a good pace. I'm happy because I didn't get lost. So, it's been a good day for me!"

It wasn't good news for the main American in the race, Quinn Cody, who had trouble with his bike and ended up falling nearly a half-hour behind Coma and the other frontrunners.