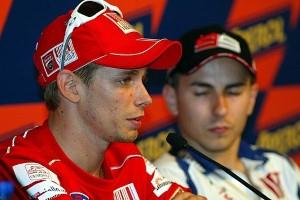 Casey Stoner wowed MotoGP fans this year with his dominant performance on the track, which ended with the Australian rider taking home the championship. However, the Repsol Honda racer recently proved that he wasn't just talented in two-wheel racing, but could handle the demands of a car as well.

Cycle News reports that Stoner recently "borrowed" the Team Vodafone Holden Commodore VE2, which is driven by fellow Australian Craig Lowndes in the V8 Supercar Championship. Stoner got to test drive the car for 90 laps at the Driving Centre in Norwell, Queensland, and shared his thoughts with the news source after experiencing the four-wheeled fun.

"In its own ways the track feels narrower, especially going into the left hand corners," he told the news source. "With these cars you can use actually quite a lot of the track so that can feel a little similar to being on the bike. With everything I am learning today, I have to forget everything I know about bikes and change to learn to drive these, and it is the same thing going from cars to bikes."

Stoner will be looking to repeat next year with a bigger engine and larger field of competition when MotoGP returns for 2012.